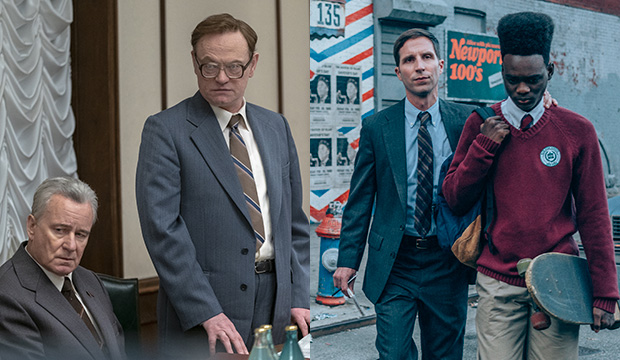 The Best Limited Series Emmy battle . has shaped up to be a two-horse race between HBO’s “Chernobyl” and Netflix’s “When They See Us,” both of which crashed the scene in the final month of eligibility (May) and were met with instant critical acclaim and an arousing audience response. “Chernobyl” racked up 19 nominations, the most for any limited series this year, and “When They See Us” earned 16. Both are grim fact-based dramas, undeniably timely, and have one writing and directing nom each, but where do they differ? The following five factors could end up tipping the scales in one’s or the other’s favor:

1. Best Casting win
Bearing in mind that TV movies and limited series used to compete in a joint category, the winners for Best Casting for a Limited Series, Movie or Special and for Best Limited Series have gone hand in hand since 2012. This would give “When They See Us” a leg up as it just claimed the casting award at Sunday’s Creative Arts Emmys over “Chernobyl.” With that category voted on by casting directors, directors and producers, “When They See Us” already has corroborated support from those branches, which are three of the 30 that cast their votes in the top series races.

That said, over on the drama side, the last two casting winners — “Stranger Things” (2017) and “The Crown” (2018) — didn’t go on to win drama series, so there’s a chance that “When They See Us” is the show to finally break the trend on the limited side. Like “Stranger Things,” it might have capitalized on successfully assembling a massive ensemble cast featuring, among others, children and a handful of previously unfamiliar or lesser known faces.

2. Acting nominations
“When They See Us” bagged eight acting noms, tying “Angels in America” (2004) for the second most acting bids for a limited series to date. Not only did it carry previous Emmy nominees and/or winners Vera Farmiga, John Leguizamo, Niecy Nash and Michael Kenneth Williams to nominations, but also rookie contenders Asante Blackk, Marsha Stephanie Blake, Aunjanue Ellis and Jharrel Jerome. But most notably, 17-year-old Blackk was nominated for his first acting role, and Jerome, Ellis and Nash snuck into lead races for supporting turns. This suggests that actors went out of their way to check off this show, which could considerably bolster its chances to win series, as the acting branch is one of the TV academy’s largest.

“Chernobyl,” on the other hand, was able to get in its core trio Jared Harris, Stellan Skarsgard and Emily Watson, but missed out for supporting player and rising star Jessie Buckley. The last limited series to win the top prize with fewer than four acting nominations was “Downton Abbey,” which competed as limited series for its first season in 2011 and had two acting bids. (Best Limited Series and Best TV Movie were combined into one category from 2011-13; “Game Change” and “Behind the Candelabra” won in 2012 and ’13, respectively.) But “Chernobyl’s” soft performance in the acting races is relative to the show itself since, unlike its rival, it didn’t feature a large ensemble.

3. Below-the-line support
“Chernobyl” cleaned up in the below-the-line categories this past Sunday, amassing an impressive seven wins; it even beat fellow HBO juggernaut and 32-time nominated “Game of Thrones” in Best Production Design for a Narrative Period or Fantasy Program (One Hour or More). This stands in stark contrast to “When They See Us’” one win, which was for casting. Yes, only five of its 16 noms were below the line, but substantial support from those branches could be vital when it comes to winning the top prize. Again, the last limited series to win with merely one below-the-line win was “Fargo” in 2014, which also won casting.

One of “Chernobyl’s” wins was for Best Limited Series/TV Movie Single-Camera Picture Editing, where “When They See Us” wasn’t even nominated. It’s not so much the win that matters, but the nomination since every limited series winner since 2010 has at least been nominated in this category. The wins, on the other hand, sometimes but not always correlate with the series winner.

4. Character-driven vs. plot-driven
It’s difficult to put either show into just one category since both feature character-driven action and are fact-based series, but “When They See Us” nonetheless sticks out as a character examination, while “Chernobyl” is naturally more of a clinical, fact-driven exploration of the truth. Why does this matter? Because recent limited series winners, whether it be one of the “American Crime Story” installments (“The People vs. O.J. Simpson,” 2016; “The Assassination of Gianni Versace,” 2018) or “Big Little Lies” (2017), have been more in vein of “When They See Us’” character-driven nature. Emmy voters love nothing more than to watch the layers of a character be peeled back, something that “When They See Us” features more so than “Chernobyl,” which likely manifested in the eight acting nominations.

Of course, “Chernobyl” still brilliantly balances its science-heavy focus with enough emotional beats that writer Craig Mazin injected into the story to make the ramifications of the 1986 disaster palpable to viewers. In fact, since this horrific disaster had such widespread effects, the show’s rather detached quality might actually resonate with voters.

5. HBO vs. Netflix
Unlike Netflix, which is just on its second nom in Best Limited Series, HBO has a solid track record in this category with nine previous wins. Besides “Chernobyl,” it also has “Sharp Objects” contending for the win this year, but since that was shut out of the writing and directing races, and netted only eight noms overall, it’s improbable that it steals too many votes from the former. However, HBO already looks safe to net the drama series prize for “Game of Thrones,” and could very well just take comedy series as well for either “Barry” or “Veep.” So voters may just want to spread the wealth and give Netflix its long-awaited first series win.

Currently, our combined Emmy odds have “When They See Us” as the front-runner, followed closely by “Chernobyl” in second, Showtime’s “Escape at Dannemora” in third, FX’s “Fosse/Verdon” in fourth and “Sharp Objects” in fifth.