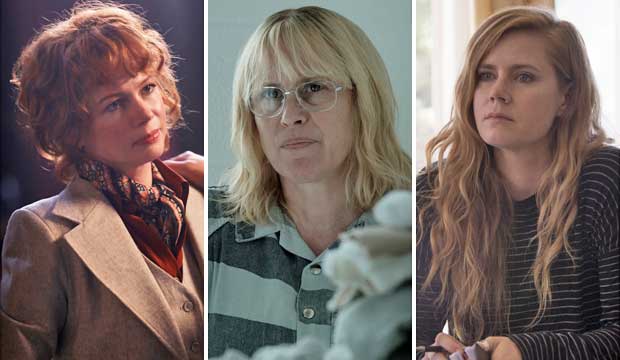 Best Movie/Mini Actress may be 2019’s most stacked Emmy category. The top four contenders according to Gold Derby’s official racetrack odds have 2 Oscars out of 14 nominations: Patricia Arquette (“Escape at Dannemora”), Amy Adams (“Sharp Objects“), Michelle Williams (“Fosse/Verdon”) and Emma Stone (“Maniac”). As of this writing Arquette is still the front-runner to win, as she has been since we opened our predictions earlier this spring, but our Experts don’t think it’s a slam dunk for her.

Arquette has already won Golden Globe, SAG and Critics’ Choice Awards for her performance as Tilly Mitchell, the real-life prison employee who helped two convicted murderers escape prison in upstate New York. No doubt thanks to her sweep of the winter-season awards, she leads our Emmy predictions with 71/20 odds. Those odds are calculated based on the combined forecasts of thousands of Gold Derby users who have made their predictions thus far (log in to make or update your own forecasts right here).

Among the users betting on Arquette are 12 out of the 15 Expert journalists we’ve polled so far from top media outlets. She’s also supported by most Gold Derby Editors who cover awards year-round for the site and the vast majority of our Top 24 Users who got the highest scores predicting last year’s Emmy nominations. So is it a done deal?

Not so fast. Adams, who plays a troubled journalist investigating a double murder in her hometown, tied with Arquette at the Critics’ Choice Awards. Now she ranks second in our Emmy predictions with 9/2 odds and support from Experts Matthew Jacobs (Huffington Post) and Ben Travers (IndieWire).

Williams also gets 9/2 odds for her performance as real-life dancer and actress Gwen Verdon, and she has Expert Matt Roush (TV Guide Magazine) in her corner. Though Adams and Williams had early success on the small screen (Adams in various guest and recurring roles, Williams as a star of “Dawson’s Creek”), neither has been nominated for an Emmy yet. However, Arquette is already a winner, having won Best Drama Actress in 2005 for “Medium.”

Thus far none of our Experts are betting on Stone, and it’s really saying something when a recent Oscar champ for Best Actress — and a 2019 Best Supporting Actress nominee for “The Favourite” — is an underdog in an Emmy race, where award-winning movie stars are usually catnip for voters. Click on the graph below to see more detailed prediction stats in this race and many others.