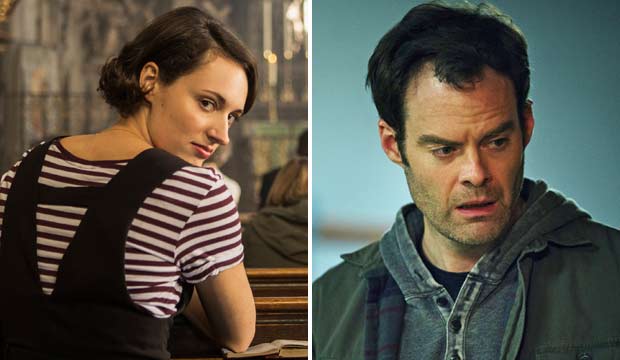 More and more these days, actors are moving behind the camera to write, direct and produce their own TV shows, so it’s fitting that this year’s Emmy front-runners for Best Comedy Writing and Best Comedy Directing are both doing double or triple duty as the stars of their shows. Phoebe Waller-Bridge is tipped to win the writing award for the second season premiere of “Fleabag,” while Bill Hader is out front for directing the “Barry” episode “Ronny/Lily.”

Hader already won an Emmy in 2018 for his lead performance in “Barry,” but he lost all his behind-the-scenes nominations. This year, however, he gets leading odds of 37/10 to win as a director based on the combined predictions of thousands of Gold Derby users. That includes 15 out of 30 Expert journalists we’ve surveyed from major media outlets and 8 out of 11 Editors who cover awards year-round for Gold Derby. He’d join a short list of actors who have won for directing themselves, following Alan Alda (“M*A*S*H”) and Donald Glover (“Atlanta”).

Meanwhile, Waller-Bridge is the heavy favorite to win the writing award with leading odds of 5/1. She has 23 Experts and all 11 Editors betting on her to prevail. Actors have an even stronger track record in writing categories than they do in the directing race, with trophies going to actor-scribes Ellen DeGeneres (“Ellen”), Garry Shandling (“The Larry Sanders Show”), Tina Fey (“30 Rock”) and Aziz Ansari and Lena Waithe (“Master of None”), to name a few.

And not only did Waller-Bridge write her nominated episode of “Fleabag,” she wrote all 12 episodes of the series, based on her own one-woman show. And on top of that, Waller-Bridge also created Best Drama Series nominee “Killing Eve,” so love for that show may spill over here too. And since she doesn’t plan on continuing “Fleabag” for a third season, this may be Emmy voters’ last chance to honor her for the show, further encouraging them to check her name off.

Do you agree with our predictions that the directors and writers branches of the TV academy will get their act(ors) together on Sunday night? How many awards do you think Waller-Bridge and Hader will win before the night is over?