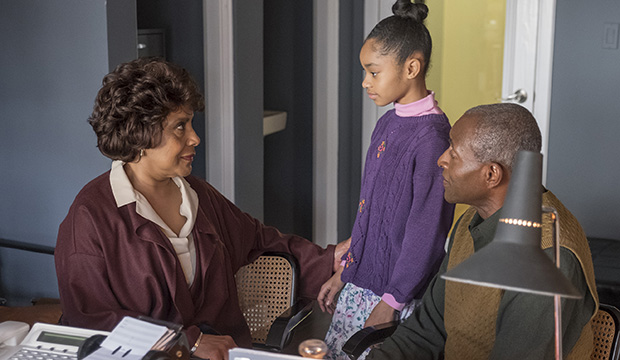 Television, film and Broadway star Phylicia Rashad has been a celebrated actress in Hollywood for more than 40 years following her screen debut as Ventita Ray in the 1976 TV series “Delvecchio.” Now, at age 71, the iconic actress could win her first Emmy after being nominated for Best Drama Guest Actress for NBC’s “This is Us.”

In the episode “Our Little Island Girl,” Rashad plays Carol Clark, the strict, no-nonsense mother of Beth Pearson (Susan Kelechi Watson). When Beth travels home to take care of her ailing mother, flashbacks to her childhood and her heartbreaking family story begin to unravel and explain the woman she has become today. The episode begins by showing Carol continuing her career as a tough-as-nails high school principal who masks her ailing hip injury behind a tough persona that demands the respect of all her students. Rashad’s commanding presence immediately takes over the screen and a simple disapproving glance at one of her pupils is enough to make the casual viewer want to cower in shame.

Later in the episode, Beth takes a road trip to visit her mother, Carol, in hopes of convincing her that it’s finally time to retire. Despite being a grown woman, Beth still clams up every time she’s in her mother’s presence. She’s terrified to explain her own news about being recently laid off from her job. Then, in a flashback, we start to see where this fear stems from. A young Beth is accepted into a prestigious ballet academy, and while her doting father is thrilled, Carol is disapproving and skeptical a dance school should take priority over more important academic studies. As years pass, Beth’s dreams are dashed when she can’t quite measure up to the level of dance required of her and her father is diagnosed with terminal lung cancer.

SEE‘This Is Us’ has won an acting Emmy every year, and Phylicia Rashad is expected to continue that streak

Could “Our Little Island Girl” land Rashad her first Emmy? Let’s dive into the pros and cons:

Rashad is essentially the lead in this episode as the only actress featured in both flashback and present-day scenes. Unlike other featured actresses in this category, Rashad dominates the story line from beginning to end and her ferocious performance holds the episode together. The rigid exterior of Carol is brilliantly broken down by Rashad who is just as effective giving a raw, tearful performance as she is a strict, domineering one. Her range of emotion is noteworthy and will certainly remind Emmy voters why she is one of the most respected veteran actresses in show business. As each layer of her character is peeled back, Rashad’s performance becomes even more breathtaking to watch.

Rashad is long overdue for her first Emmy win. She has previously been nominated for three Emmy awards including two for Best Comedy Actress for her historic role as Clair Huxtable on “The Cosby Show” in 1985 and 1986. She lost those bids to Jane Curtin (“Kate & Allie”) and Betty White (“The Golden Girls”), respectively. Her third nomination came in 2008 for Best Movie/Mini Actress for her portrayal of Lena Younger in “A Raisin in the Sun,” a role for which she won a Tony award four years earlier. Rashad lost that Emmy race to Laura Linney who played Abigail Adams in “John Adams.”

SEEEmmy episode analysis: Michael Angarano (‘This Is Us’) is scarred for life as Nicky in ‘Songbird Road: Part One’

Although Rashad has a recognizable name that will stand out on the Emmy ballot, the women she’s competing with aren’t exactly slouches. She’s up against three other notable veterans — Cherry Jones (“The Handmaid’s Tale”), Jessica Lange (“American Horror Story: Apocalypse”) and Cicely Tyson (“How to Get Away With Murder”) — and two women whose historic TV series have since left the airwaves — Laverne Cox (“Orange is the New Black”) and Carice van Houten (“Game of Thrones”).

Also working against Rashad is the fact that her character was only present in one episode. Other nominees in this field play familiar characters with long-stretching storylines throughout the series which they represent. Rashad is truly a guest actress who will not be observed in any other episodes submitted by her costars.

How do Grammy panels and committees work, and do we need them? They boost underdogs but are mired in…