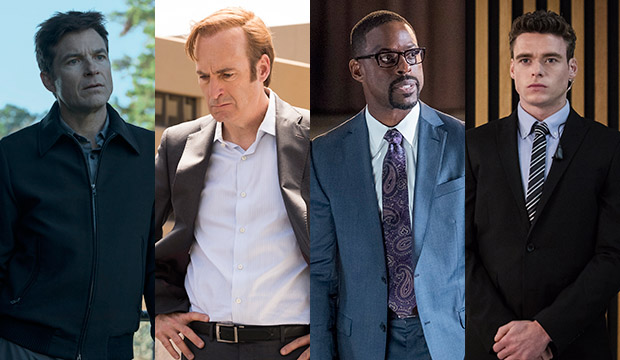 There are some Emmy races that feel like a done deal — Best Drama Series (“Game of Thrones”), Best Comedy Actress (Julia Louis-Dreyfus for “Veep”), but Best Drama Actor is not one of them. At least according to our pundits.

With defending champ Matthew Rhys (“The Americans”) gone, our Experts are split between four people — Jason Bateman (“Ozark”), Bob Odenkirk (“Better Call Saul”), Sterling K. Brown (“This Is Us”) and Richard Madden (“Bodyguard”). The two ostensible frontrunners are Bateman and Odenkirk, who each have five and four Experts backing them, respectively. Brown and Madden each have one Expert picking them to win it all.

Bateman leads our overall odds, with 39/10, thanks to additional support from our Editors and Top 24 users. His show has also been thoroughly embraced by the industry, getting 14 guild nominations this year, including a leading four Screen Actors Guild Awards bids. Bateman, of course, won the SAG Award, boosting his chances to finally nab his first Emmy. He was Emmy-nominated last year for acting and directing “Ozark,” and the series scored an additional directing bid as well.

SEE An Emmy ‘Game of Thrones’: Kit Harington and Richard Madden could battle it out for Best Drama Actor

After “Better Call Saul” sat out last year’s Emmy cycle, Odenkirk shouldn’t have trouble returning to the drama actor race, especially since there are three open slots with Rhys and “Westworld” stars Ed Harris and Jeffrey Wright ineligible. He was nominated for the first three seasons, and Season 4 hurled Jimmy closer to becoming Saul Goodman in the wake of Chuck’s (Michael McKean) death in the Season 3 finale. The problem is, unlike “Breaking Bad,” which won Emmys every season — and some pretty major ones to boot — “Saul” has never taken home a single Emmy, going 0-23 so far. But maybe a softer field will open the door for Odenkirk.

Brown, the 2017 champ, is looking for his second victory in the category for “This Is Us.”  If his TV dad Milo Ventimiglia, who’s in fifth place in our odds, also gets in with him, as they’ve done the past two years, it might hurt Brown’s chances. Unlike the first season, when Brown was the overwhelming favorite and awards representative of the show, his momentum has tapered off, and the difference of support between him and Ventimiglia is probably negligible now.

Like Bateman, Madden has some hardware on his shelf this season, grabbing the Golden Globe for “Bodyguard.” He certainly has a winning episode with the taut, tense finale, and would honestly probably be winning in a walk under the old tape system. A Madden coronation would also continue the pattern that started in 2011 of people prevailing in this category for first seasons or final seasons. One of those champs was Rami Malek for “Mr. Robot” in 2016, whose trajectory of a young actor winning for a breakout hit is most akin to what Madden’s trying to pull off.

Our sixth predicted nominee is Madden’s former “Game of Thrones” co-star Kit Harington, who was snubbed last year when he shifted from supporting to lead. Harington would also fit the mold of a winner for the last season of his show, and who knows how big of a goodbye pat on the pat voters might give “Game of Thrones.”