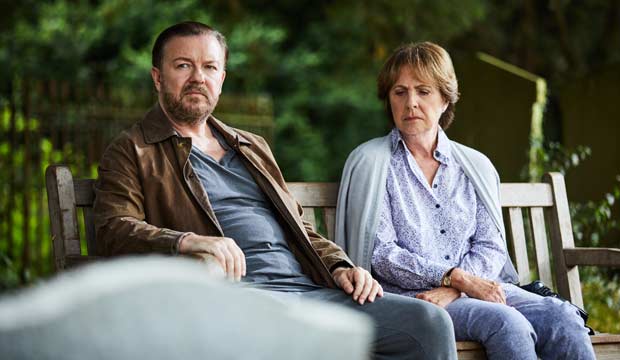 With two wins and 21 nominations, you can never count Ricky Gervais out of an Emmy race, yet there’s a good chance he could be overlooked for what just might be the best performance of his career. In Netflix‘s “After Life,” the actor brings new shades to his screen persona as Tony, a grieving widower who decides to take his anger out on the world by saying and doing exactly what’s on his mind. It’s the kind of nuanced work that should be showered with accolades, starting with a Best Comedy Actor bid.

Granted, Gervais without a filter is par for the course. The British comedian has made a name for himself with his shocking, abrasive sense of humor both in his standup specials and in his television shows “The Office,” “Extras” and “Derek.” Yet “After Life” adds an element of recognizable pain to the pitiless barbs that have made him famous.

There’s also something nakedly autobiographical about the performance that’s striking to see. With David Brent (“The Office”), Andy Millman (“Extras”) and Derek Noakes (“Derek”), Gervais could hide behind the outrageousness of his characters. Yet with Tony, a nice guy driven to bitterness by his wife’s death, there’s no makeup, costumes or funny voices to distract from the real guy underneath. What we’re left with instead is raw, open and honest.

Of course, it’s also very funny. Gervais doesn’t sacrifice the laughs for the tears, and the funniest moments come from Tony’s efforts to be as appalling as possible, whether it’s trying heroin for the first time, hurling insults at his long-suffering coworkers or challenging some neighborhood punks who are trying to mug him. Since being a jerk doesn’t come naturally to him, there’s a certain fish-out-of-water quality to the character’s nastiness that’s identifiably hilarious.

The show represents a giant leap forward for Gervais as a writer and director as well, and certainly he could contend for penning the pilot and helming the second episode (both of which are his official Emmy submissions). Yet it’s his tendering rendering of Tony’s journey towards enlightenment that shouldn’t be overlooked.

Having won the Best Comedy Actor award for “Extras” in 2007 (his other victory came in Best Comedy Series for “The Office” in 2005), we know Emmy voters appreciate his abilities as a performer. If he doesn’t return to that category again this year for “After Life,” we’ll be the ones who are grieving, and we just might have a few choice words for the TV academy to boot.