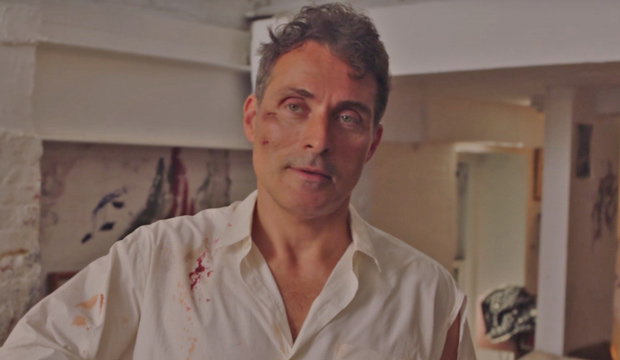 Rufus Sewell has had a career that spans over three decades in film, television and theater and is now nominated for his first Emmy Award for Best Comedy Guest Actor for playing artist, Declan Howell, on “The Marvelous Mrs. Maisel.” He’s submitted the Season 2 episode, “Look, She Made a Hat,” for Emmy consideration.

Midge (Rachel Brosnahan) is in the middle of a date with her new boyfriend, Dr. Benjamin Ettenberg (Zachary Levi), where he’s introducing her to New York’s art world. When they duck into a bar to grab a drink, Ben is shocked to see Declan Howell there as well, who he explains is a famous artist that no one knows about because he never sells his paintings. Howell is drunkenly lambasting Shakespeare when he tells the bartender he wants another drink. When the bartender says he’s too drunk, Howell gets up on the bar and attempts to recite a sonnet but ends up mixing it up with several other works but entertaining the crowd nonetheless. Midge goes over to say hi and introduce Howell to Ben. Howell is entranced by Midge and ends up inviting Ben to his studio the next day, but only if he brings Midge.

At Howell’s studio, Ben marvels at several pieces but Howell claims that none of them are for sale. Sensing that the visit is going to be a bust, Ben goes to a coffee shop to use their phone while Midge waits with Howell. He asks Midge about the painting she bought the previous night. Midge says that she connected with it because she felt like the woman in it had a secret that she wanted to discover. Howell then shows Midge a secret room where he has stored a painting he believes to be his masterpiece. Midge is absolutely mesmerized by the piece and wonders why he won’t sell it. Howell explains that he put everything he had into it but that it also cost him greatly including his family and his home, so why would he sell it? Ben arrives back at the studio and starts looking for Midge. Howell tells Midge not to speak of the piece and that he’ll let Ben purchase a painting of his choice.

Can Sewell prevail on his first nomination? Let’s examine the pros and cons:

Sewell is the kind of actor who has been around for a while but has never gotten the recognition he deserves and those type of actors can do really well in these guest categories. Think of people like Peter Scolari, John Turturro, Gerald McCraney, Paul McCrane and Glynn Turman.

Sewell gets to show some nice range, but his drunk scene in the bar is quite a showstopper. Let’s not forget that scenes of inebriation have helped several people take home Emmys in the comedy categories including Jim Parsons, Julia Louis-Dreyfus and Jeremy Piven.

It’s not out of the question that “Maisel” could go on another sweep this year and if it does, Sewell could very well go along for the ride.

There’s a lot of fun to be had with the role but, other than the bar scene, it’s not a very laugh-out-loud performance and some voters may count that against this, even if they like the performance.

Hosts of “Saturday Night Live” are always a threat here, even when there are several nominated against each other. The strong episodes from Matt Damon, Adam Sandler and John Mulaney are hard ones to be up against.

He’s up against another “Maisel” performer in Luke Kirby. If vote-splitting is a factor, that’s going to hurt Sewell.