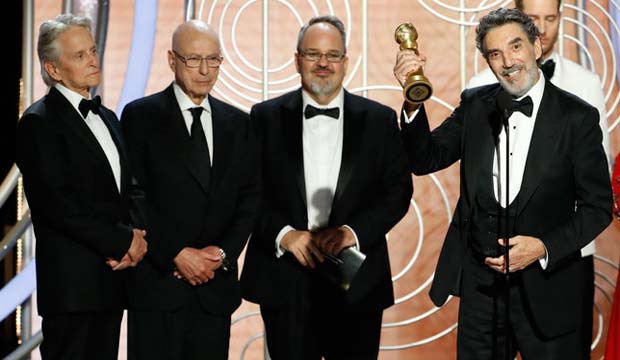 As he accepted his Golden Globe for Best Comedy/Musical Series earlier this year, “The Kominsky Method” creator Chuck Lorre remarked, “This doesn’t happen to me.” And he’s right. Despite producing such mega-hit sitcoms as “The Big Bang Theory,” “Two and a Half Men” and “Mom,” Lorre had never received a major Hollywood award until his latest Netflix comedy came around. Now that he’s been recognized by Globe voters, it’s time for him to be similarly honored by the Emmys.

But what about Lorre, who devised this series about acting coach Sandy Kominsky (Douglas) and his agent, Norman Newlander (Arkin), coming to terms with aging, relationships and their careers? If nothing else, he deserves kudos for challenging himself with a major departure from his most famous works. Having co-created some of the most successful multi-camera sitcoms in network television history, Lorre set out to make “Kominsky” different in every way, crafting a single-camera blending of comedy and tragedy airing all at once on Netflix.

The results might just be the best work of his career. Certainly, it’s his most poignant, as Sandy and Norman must come to terms with the mistakes, heartaches, tragedies and triumphs of their lives as the world around them continues to change. Being on a streamer didn’t just allow Lorre to use some foul language: rather, it opened up the possibility for more nuanced and honest storytelling.

Though he’s contended multiple times as a producer and songwriter, Lorre has yet to compete in the writing and directing categories. He’s a strong contender for helming the pilot episode, “An Actor Avoids,” in which Sandy must help Norman deal with the death of his wife, and for penning the second one, “An Agent Grieves,” during which the funeral takes place and Norman’s estranged daughter Phoebe (Lisa Edelstein) arrives.

If nothing else, a victory for “Kominsky” would prove perfect timing in the same year that Lorre’s “The Big Bang Theory” signed off after 12 seasons. Either way, it’d be a deserving win for an artist who proved that after decades on the airwaves, he’s still willing to reach for greater heights creatively.