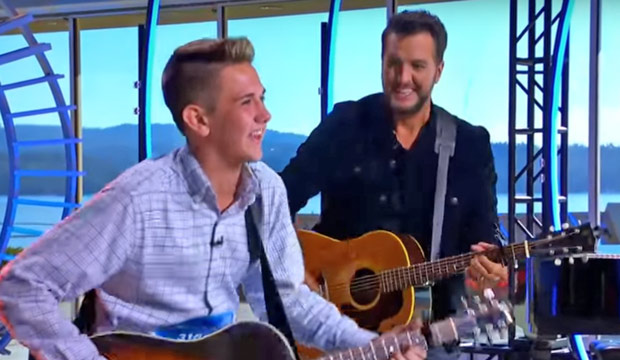 Ethan Payne‘s “American Idol” journey has come to the end. This 15-year-old country phenom, who previously met Luke Bryan through the Make-A-Wish Foundation because of his cystic fibrosis diagnosis, was eliminated during the group rounds in Sunday’s episode. The saddest part for Ethan wasn’t that he was sent back home to Macon, Georgia, but that it was his icon Luke who had to make the announcement. “It’s shattered my heart, but I still love him,” Ethan said while holding back tears.

Following Ethan’s performance of Bebe Rexha‘s “Meant to Be” with his group, Luke let out a deep sigh and stated, “I cannot believe I’m the one having to do this. I love you. Please stay strong. Keep doing what you’re doing. But this is the end of the road.” Ethan’s group members gave him a hug, but the youngster seemed to be in a daze as he walked out of the Orpheum Theatre.

Back in his initial audition, Ethan told Lionel Richie and Katy Perry about how he met Luke when he was 13 years old at one of Luke’s concerts. The country superstar surprised the teenager by giving him his personal guitar, which he brought with him to “American Idol.” “Oh my goodness, I know this feller,” Luke declared with a smile when Ethan first stepped into his audition.

“I just came out here to show you all my talent, especially this beautiful girl,” Ethan said about Katy. When a surprised Katy responded, “Ethan, you are 15 going on 30,” he grinned back, “They always said I had an old soul.” Ethan asked Luke to join him for an impromptu duet of “Do I,” which Luke agreed to even though he admitted that he was “physically nervous.”

Lionel raved that Ethan was “an inspiration,” while Katy chimed in, “Ethan, I loved your confidence.” The 15-year-old easily received three “yes” votes from the judges, including his father figure Luke, but unfortunately Ethan’s “American Idol” journey ended during the middle of Hollywood week.