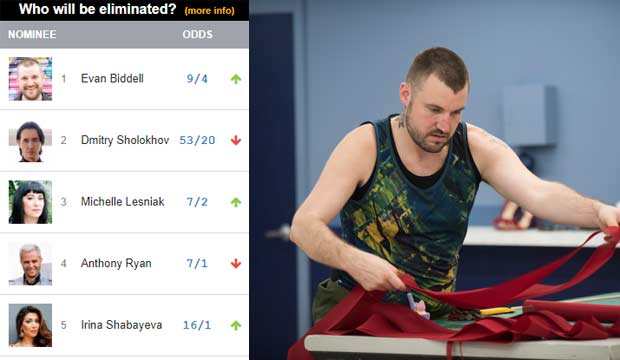 “Project Runway All Stars” season seven is almost over, and the competition has turned out to be pretty lopsided. The season started with 14 designers, 7 who were past champs on the American “Runway” or “All Stars” series and 7 who won previous seasons of the show’s international spin-offs. But after 10 weeks there are 5 designers left, and only one of them is from abroad: Evan Biddell from Canada. Can he break the foreign curse and go all the way? We think he might be in trouble.

As of this writing Biddell is on top of our elimination predictions with 9/4 odds of being sent home tonight. That’s based on the combined forecasts of Gold Derby users who have entered their picks here in our predictions center. But it would be a precipitous fall for Biddell, who for most of the season has been solid as a rock and cool as a cucumber.

Biddell has had a cocky attitude for much of the season, but he usually backs that up with his designs. He sometimes finishes early while other designers are still slaving away, but he managed to stay out of the bottom three for the first nine weeks of the competition. There didn’t seem to be any cracks in his veneer until the “Climate Quick Change” challenge, in which the designers had to create looks that could transition from one weather condition to another.

He second-guessed himself throughout the challenge, revising his design and ending up with just a sports bra under a jumpsuit, which underwhelmed the judges. Not only was he in the bottom three this time, he actually finished in the bottom two and just barely escaped elimination. Instead, the judges booted Christina Exie, who had just won her second design challenge the week before, so the judges are clearly not sentimental.

So can Biddell turn it around after his close call? Or are our users right that he’ll be down for the count? Click on our elimination prediction graphs below to see more detailed prediction stats for tonight’s show. 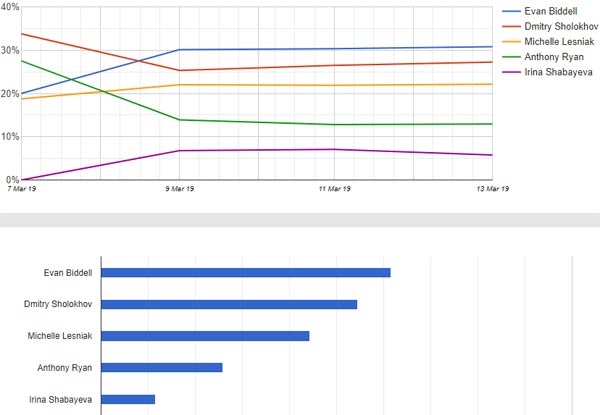