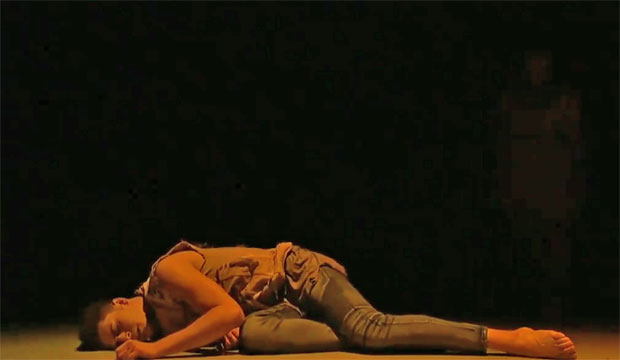 Ezra Sosa had nothing to lose during “Top 6 Perform” night on “So You Think You Can Dance.” America’s votes had landed him in the bottom two in both of the preceding weeks, so he had to pull out all the stops to have any hope of reaching the final four. And pull out the stops he did. His contemporary duet with all-star Gaby Diaz was one of the night’s best performances, so good that it brought the judges (and Sosa himself) to tears. Scroll down to watch it below.

This contemporary number brought Sosa together with two “SYTYCD” all-stars for the price of one. There was season 12 champ Diaz, of course, but also season seven contestant Robert Roldan, who choreographed the routine about a relationship that has become a burden. When Roldan asked Sosa if he could relate to the subject, Sosa alluded to a relationship he had that put a lot of weight on his shoulders. The emotional floodgates opened both during rehearsals and during his actual performance.

This isn’t the first time the ballroom specialist has tackled contemporary, and he’s quite good at it. But this was probably the most emotionally connected he had been to a performance on the show. He cried. The judges cried while giving him a standing ovation. And it looked like host Cat Deeley was fighting back tears when she interviewed him after his performance and he explained how it felt to express his personal truth with that dance.

Laurieann Gibson thought the choreography was “breathtaking” and Sosa was “absolutely fantastic.” Nigel Lythgoe called the performance “emotional” and “beautiful.” Dominic “D-Trix” Sandoval raved about the perseverance Sosa showed after multiple weeks in the bottom two. And Mary Murphy said, “This is your night. This is love pouring out of you.”

SEESay ‘Amen’! Bailey, Gino and Ezra on ‘So You Think You Can Dance’ gave us a religious experience with this group routine [WATCH]

Alas, it turned out to be his last night. He got the fewest votes from viewers, and the judges decided to honor the popular vote, sending Gino Cosculluela and Bailey Munoz to the finals instead. But perhaps there’s comfort in going out on arguably your best night of the competition: at least you know you left it all on the dance floor.