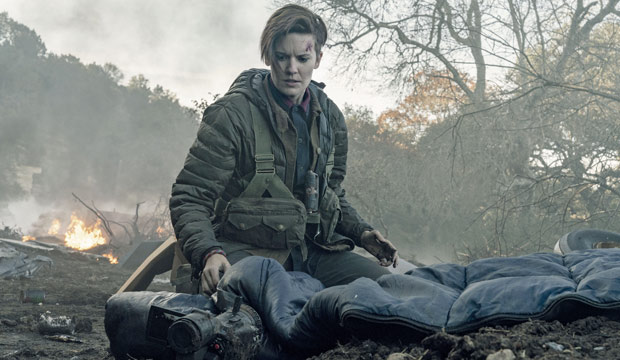 At the end of Sunday’s Season 5 premiere of “Fear the Walking Dead,” eagle-eyed viewers recognized a strange symbol of three interlocking circles that Althea (Maggie Grace) found on the uniform of a walker soldier. It’s the same symbol that was briefly seen on the helicopter that seemingly kidnapped Rick (Andrew Lincoln) during his final episode of “The Walking Dead” back in November. So what does it all mean?

“Fear” showrunners Andrew Chambliss and Ian Goldberg were notoriously tight-lipped about the symbol when they appeared on “Talking Dead” with Chris Hardwick, but they did manage to tease a little something about the soldiers. “They may remain mysterious for a little while,” stated Chambliss, “but we can say they’re definitely not robots despite the wires sticking out of the uniforms. Maybe cyborgs, I don’t know. We will learn a lot more about that symbol and the soldier, and it may have some lasting effects on a character on the show.”

As for the intricate black soldier’s uniform that Al discovered, Chambliss added, “There is a lot of logic that goes behind what is in the uniform. We kind of see it play out and how it’s utilitarian in this world. It was actually something that started to be designed on ‘The Walking Dead.’ I think there may have been plans at one point to see it there and we ended up bringing that design over to ‘Fear’ and continue to develop it and we got to introduce it to the world.”

Fans of the “Walking Dead” universe didn’t expect to see the three-ringed symbol again until perhaps the upcoming series of Rick Grimes films, so having it pop up in spinoff series “Fear the Walking Dead” was an unexpected surprise. Of course, as Chambliss reminded the audience, “We’re now behind ‘The Walking Dead’ again” by several years, as that show jumped forward in time following Rick’s dramatic exit.

“Fear the Walking Dead” premiered its new season on June 2 with Lennie James once again getting top billing as Morgan Jones, the fan-favorite survivor from “The Walking Dead.” But Morgan won’t be the only character to be spun off as he’ll soon be joined by Austin Amelio‘s Dwight, who hasn’t been seen since the parent show’s 2018 finale when he left the group to go find his wife Sherry (Christine Evangelista).

What did you think of the Season 5 premiere, titled “Here to Help,” which began with an exciting plane crash? Sound off down in the comments section with your theories about the mysterious symbol and the impending re-introduction of Dwight.