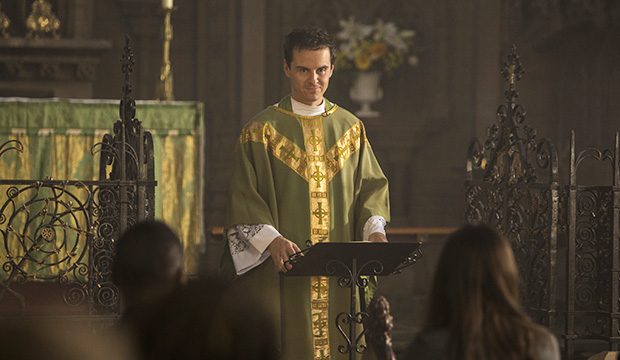 Right now, two recent Emmy-winning supporting actors —  Tony Shalhoub (Amazon’s “The Marvelous Mrs. Maisel”) and Peter Dinklage (HBO’s “Game of Thrones”) are ranked in second and fourth places to win Best Supporting TV Actor at the Golden Globes, according to the latest odds that combine all predictions at Gold Derby. In between them in third place is Stellan Skarsgard, who was nominated at the Emmys for “Chernobyl.”

But their main competition, who currently sits at No. 1 with 7/2 odds, is Andrew Scott aka the “hot priest” who becomes entangled with Phoebe Waller-Bridge‘s title character in the second season of Amazon’s cutting-edge British comedy “Fleabag.” The Irish actor, best known as Moriarty on “Sherlock,” made a big impression on fans of the show’s second season as his down-to-earth man of the cloth helped to lessen Fleabag’s sense of guilt and self-loathing by giving her permission to forgive herself.  Complicating matters, however, is their intense sexual attraction to one another.

But the Priest, as he is known, is not without his own all-too-human foibles. He has a weakness for alcohol — one shared by Fleabag — and a penchant for swearing, just to be shocking and to prove he is approachable. As he prepares to preside over the wedding of Fleabag’s horrid stepmother-to-be — Olivia Colman, no less — to their widowed father, the actor invests his clergyman with abundant empathy and humor while avoiding being a holier-than-thou type.

If he hadn’t come into Fleabag’s life and allowed her to connect with such an understanding soul, who knows what would have happened to her? We learn that the Priest is the only one besides us the viewers to hear her break the fourth wall and see her flash sly knowing glances at the TV screen. To him, it’s like she disappears for a moment. It helps immensely that Waller-Bridge and Scott have crazy chemistry with each other while the actor attempts to make his minister into someone admirable even when he is sorely tempted.

The pair’s best moment together is when the Priest has this non-believer enter a confessional in an empty church  as he listens to her expound upon her fears, doubts and shame. At one point, he commands that she kneel and it is quite a turn-on for both of them. They end up kissing and would have probably gone farther if a large painting hadn’t fallen off the wall as if it were a sign from you know who. Eventually, the Priest must choose between Fleabag and God. It is a difficult decision indeed.

In a recent interview with London’s Evening Standard, Scott expressed mixed feelings about being seen as a sex symbol. “It’s embarrassing to even think about it.” But he is proud to be able to show a more humanistic and relatable side to priesthood. ” It wasn’t just a storyline for shock value. To see a priest who is a human being is important. To fall in love with somebody but to be married to the church — that’s a really interesting dilemma. I think more people of our generation would enter the church if they could have love as well as a spiritual life.”

The 42-year-old actor is already reaping the benefits of being on a suddenly hot series in a role that has resonated with fans and won five Emmys including Outstanding Comedy Series this year. He played a grief-stricken driver for hire on Netflix’s “Black Mirror,” appeared in the Amazon anthology series “Modern Love” and is a World War I lieutenant in the upcoming theatrical movie “1917,” which opens December 25.

If somehow Scott does not win a Golden Globe, he can congratulate himself on making “hot priest” a popular costume choice this past Halloween.