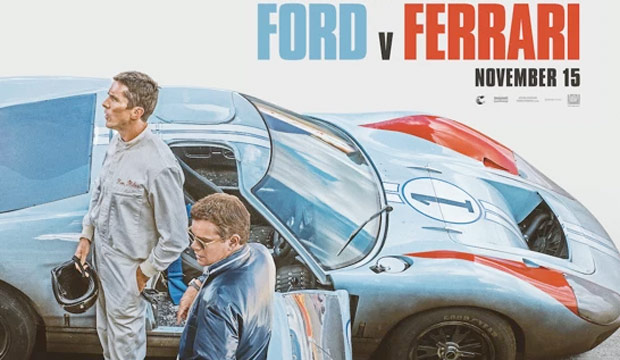 The conventional  awards-season wisdom these days when it comes to pitting co-stars against one another as leads in the same film?  That the smart move is that one steps down and joins the lineup of  rival supporting players — the better to avoid splitting votes while possibly boosting the movie’s trophy count.

But ‘Ford v Ferrari,’ the biographical tale of how the American automaker took on the elite Italian sports-car brand while competing against one another in the 24 Hours of Le Mans race in 1966, has decided to speed down the road rarely taken these days.

The film with its visceral vroom-vroom sequences, clashing male egos and manly fisticuffs is basically racetrack filet mignon, deluxe red meat with a high-octane kick for male filmgoers. But it’s the partnership between Christian Bale‘s devilish British driver Ken Miles and Matt Damon as car designer Carroll Shelby who acts as the speed demon’s protector that keeps the film’s motor running. Just as Ford boldly entered the race-car game with the odds against it, so, too, have distributors 20th Century Fox and Disney are taking a chance to have both stars go up against each other — according to Deadline, which got the scoop.

I happened to see the film at the Middleburg Film Festival in Virginia this past weekend and in my mind — before this news was known — I figured Bale was clearly the lead since we learn about his relationships with his feisty wife (“Outlander’s” Caitriona Balfe) and his young son along with their home life. Miles gets more of a character arc while Damon’s Shelby basically helps facilitate his success and protects him from both his own worse impulses and hiss-worthy Ford execs who resent how the racer’s success upstages the brand. But both these popular stars do lend somewhat equal weight to the movie.

How rare is it that two top-billed male performers from the same movie both land in the lead category together? Not since 1984’s “Amadeus” have two actors gone head to head. F. Murray Abraham as composer Salieri and Tom Hulce as Mozart faced off, with Abraham taking the trophy. The lead actor category right now is pretty stuffed, with Adam Driver (“Marriage Story”), Joaquin Phoenix (“Joker”), Robert De Niro (“The Irishman”), Leonardo DiCaprio (“Once Upon in America”) and Antonio Banderas (“Pain and Glory”) in the top 5 on Gold Derby’s combined Oscar odds. Bale ranks No. 9 with 58/1 odds to win while Damon is at No. 30 with 100/1 odds. But the supporting ranks is even more crowded, with more than 60 names on the prediction site.

There are many more male pairings in films that are in contention for awards consideration: Leonardo DiCaprio and Brad Pitt in “Once Upon a Time In Hollywood,” Jonathan Pryce and Anthony Hopkins in “The Two Popes,” Matthew Rhys and Tom Hanks in “A Beautiful Day in the Neighborhood,” Robert Pattinson and Willem Dafoe in “The Lighthouse,” Michael B. Jordan and Jamie Foxx in “Just Mercy,” Taron Egerton and Jamie Bell for “Rocketman.” Only Pitt and DiCaprio are up in the air about who is on first and who is second tier for now.

SEETrailer for ‘Ford v Ferrari’ will get your motor running

While Damon boasts a screenplay Oscar shared with Ben Affleck for their original screenplay for 1997’s “Good Will Hunting,” he has had to make due with lead nominations for acting in “Good Will Hunting,” 2010’s “Invictus” and 2016’s “The Martian.” Bale won for his supporting performance in 2010’s “The Fighter” while scoring lead nods for 2013’s American Hustle and last year’s Vice along with a supporting bid for 2015’s “The Big Short.”

The best thing you can do right now? Shift into high gear and head to the Gold Derby prediction site to help determine whether Bale, Damon — or perhaps both — is in the driver’s seat and deserving of your support. Then head to the theater on Nov. 15 to see “Ford v Ferrari” and adjust if need be.