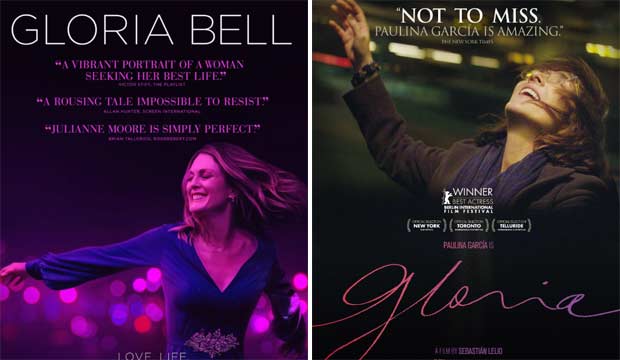 Hollywood is doing it again – and again. So far in this still-young year, there have been no fewer than five films in theaters that are English-language versions of foreign movies. Opening this Friday is “Gloria Bell,” a shot-by-shot remake of the 2014 Chilean film “Gloria, ” about a divorced middle-aged woman desperate for some romance in her routine life. The Spanish-language import starred Paulina Garcia, a popular actress in her homeland. This one has Julianne Moore, hiding behind those over-sized spectacles. While the cast is more recognizable, this is a rare Hollywood translation that benefits from having the same director, Sebastian Lelio (“A Fantastic Women”), handling matters behind the camera.

Consider that it has a 100% Rotten Tomatoes score at the moment — one percentage point higher than the original.

Then there is “The Upside,” a remake of the 2011 French film “The Intouchables,” is about a paralyzed white billionaire (Bryan Cranston) who hires a recently paroled  black convict (Kevin Hart) as his caretaker as they strike up a friendship. Believe it or not, the truth-based story has already been remade two times before, for Indian and Argentinian audiences.

Blame it on the common aversion to reading subtitles, cultural cues that get lost on foreigners or the lack of well-known actors in an international cast. But the average American movie-goer is probably not a big fan of  cinematic art-house imports these days. Even though “The Upside” was not a critical favorite with a 40% Rotten Tomatoes score vs 75% for the original, it still managed to gross a healthy $113 million worldwide.

“Alita: Battle Angel,” a cyberpunk action adventure based on a Japanese manga series that was first filmed in 1993, was directed by Robert Rodriguez and co-written by James Cameron. The cast includes Christoph Waltz, Jennifer Connelly and Mahershala Ali. It has taken in an admirable $360 million globally.

The dark-humored “Cold Pursuit” is based on a Norwegian vigilante thriller, “In Order of Disappearance,” and shares the same director, Hans Petter Moland.  No one is better at seeking vengeance than Liam Neeson. Here he is a snowplow driver in a Colorado ski resort town whose wife suffers a breakdown after their son dies from a forced heroin overdose at the hands of a drug cartel. It drew good reviews while cashing in with over $46 million worldwide.

Clearly, there is money  to be mined from English-language do-overs. However, “Miss Bala,” an action thriller directed by Catherine Hardwicke and based on the same-named 2011 Mexican film, took in only $14 million at the box office — a million less than its budget. Not even the presence of Gina Rodriguez of  TV’s “Jane the Virgin” drew a crowd.

The best remakes must make a case for existing. The hysterical pairing of Robin Williams and Nathan Lane in 1996’s “The Birdcage,” a remake of the French-Italian art-house hit “La Cage aux Folles,” was bait enough . It didn’t hurt, either, that Mike Nichols directed and Elaine May did the screenplay.

Some remakes like 1960’s “The Magnificent Seven, based on Akira Kurasowa‘s “Seven Samurai” from 1954, are clever enough to Americanize the material into a genre like a Western while casting a stellar male ensemble cast including Yul Brynner, Steve McQueen and Eli Wallach.

And only Martin Scorsese could get away with re-staging “Infernal Affairs,” a 2002 Hong Kong crime thriller, in Boston and redubbing it “The Departed” with Jack Nicholson as a wily Irish mob boss and end up winning Best Picture, Best Director, Best Adapted Screenplay and Best Film Editing in the bargain.

There are some films that are considered classics that you may not even know were originally shot overseas. Take our poll and tell us which of 10 films mentioned most surprises you that it is a remake of a foreign film.