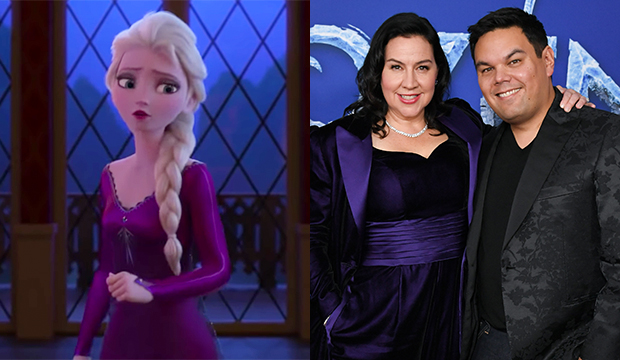 Husband-and-wife songwriting duo Robert Lopez and Kristen Anderson-Lopez have two Best Original Song Oscars, but they’ve yet to win a Golden Globe. Will the third time be the charm?

The pair, who wrote every song on the “Frozen II” soundtrack, is nominated for “Into the Unknown,” the lead single performed by Elsa (Idina Menzel) in the sequel that’s positioned to be the next “Let It Go.” “Let It Go,” of course, was a huge earworm, winning an Oscar and two Grammys for the Lopezes, but they lost the Golden Globe to U2‘s “Ordinary Love” from “Mandela: Long Walk to Freedom” (2013). (This was the second time the Globes awarded U2 only for the Oscars to go a different way; the band won for “The Hands That Built America” from 2002’s “Gangs of New York,” but Eminem nabbed the Oscar for “Lose Yourself” from “8 Mile.”)

The Lopezes contended two years ago with “Remember Me” from “Coco” (2017), for which they claimed another Oscar, making Robert the first person to achieve a double EGOT (the first Oscar made him the youngest person, then 39, and the fastest, in a 10-year span, to EGOT). But again, the Hollywood Foreign Press Association didn’t bite; the Globe went to the anthemic “This Is Me” from “The Greatest Showman.”

So can “Into the Unknown” finally score the Lopezes a Globe? While the song has not exploded in the same way as “Let It Go” did — and you can argue it’s not even the best song in the movie (hi, “Show Yourself”) — it’s still catchy and is the lead track that’s been Disney’s main push (Panic! At the Disco‘s version plays over the credits). The original song race is soft this year, which could benefit the couple as there is no clear frontrunner.

Plus, the HFPA has often cashed in on IOUs, whether with nominations or wins, and having passed over two-time Oscar winners is a pretty big one. Last year, you knew Mahershala Ali (“Green Book”) had the edge in supporting actor because the Globes, in one of the weirdest upsets, had awarded Aaron Taylor-Johnson (“Nocturnal Animals,” 2016) instead of Ali for “Moonlight,” for which he went on to win the Oscar. On the TV side, the biggest case of the Globes playing catch-up was when it finally gave series and acting prizes to “Breaking Bad” and Bryan Cranston for the last season because the show had become too massive a beast to overlook.

But a tiny problem for the Lopezes is that they’re competing against some pretty major names, and we know how much the HFPA likes stars. Its rival songs are written by very, very famous music stars who also perform the tunes. “(I’m Gonna) Love Me Again,” from “Rocketman,” was written by Elton John, who previously won for “Can You Feel the Love Tonight” from “The Lion King” (1994), and Bernie Taupin. “Beautiful Ghosts,” from “Cats,” is by Taylor Swift and Andrew Lloyd Webber. Beyonce penned “Spirit” from “The Lion King” with Ilya and Labrinth. And Tony winner Cynthia Erivo, who’s also nominated in drama actress for “Harriet,” co-wrote “Stand Up” from the film with Joshuah Brian Campbell.

“Into the Unknown” is currently in third place in our early odds, behind “(I’m Gonna) Love Me Again” and “Beautiful Ghosts,” and ahead of “Stand Up” and “Spirit.”