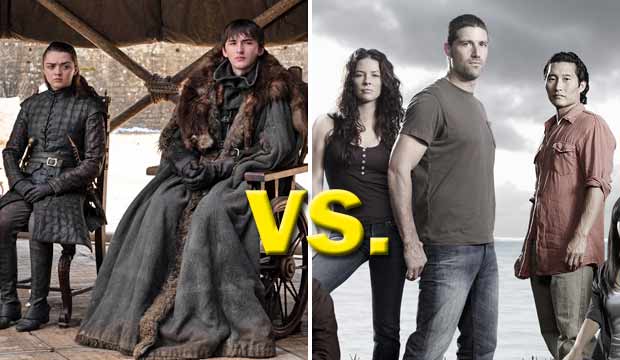 “Game of Thrones” finally came to an end on Sunday night, May 19, after eight fruitful but often contentious seasons on HBO. The final season proved especially controversial, with some ardent fans even taking to the internet to demand a redo. If this sounds familiar to TV fans that’s because it’s been about a decade since a similar backlash befell another cult hit genre series: “Lost.” Which controversial ending did you think was better? Scroll down to vote in our poll at the bottom of this post. And this may go without saying, but there be SPOILERS AHEAD.

In 2010 “Lost” ended with many of the mysteries of the island unsolved. And we found out that the survivors on the island ended up in limbo after they died at varying points in their lives, all waiting to meet up in a church together where they could “let go” and proceed to an afterlife of some sort together. Some critics loved the episode, like Robert Bianco (USA Today) who rated the finale among “the best any series has produced.” But some, including Mary McNamara (Los Angeles Times) thought fans were cheated and might want “those two-and-a-half hours and possibly six seasons back.”

Meanwhile, “Game of Thrones” finally ended its titular power struggle. After Daenerys (Emilia Clarke) barbecued the populace of King’s Landing, she promised to continue her campaign to “liberate” the rest of Westeros. She arrested Tyrion (Peter Dinklage) after he quit in a huff. Then Tyrion convinced Jon Snow (Kit Harington) to kill Dany. Then her grief-stricken dragon Drogon flew off with Dany’s corpse, never to be seen again. Then an impromptu council of lords from the Seven Kingdoms hand-picked Bran (Isaac Hempstead-Wright) as their new king after laughing off the very idea of democracy. Well, it turned out to be Six Kingdoms since Sansa (Sophie Turner) decided that the North should secede from the union. Jon ended up exiled with his Wildling pals north of the wall. Arya (Maisie Williams) decided to Frodo herself into the west to explore the uncharted frontier. And they all lived happily ever after, maybe?

Was that the ending you wanted from “Game of Thrones”? Or would you also like to Thanos snap the story back to the way it was at the end of last season for another attempt? And how did it compare to the controversial “Lost” conclusion? Vote below.