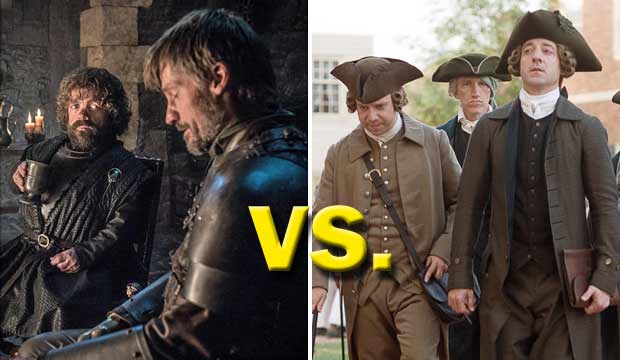 “John Adams,” also an HBO production, was a technically ambitious drama full of lavish period details that helped it rack up 23 nominations. It won Best Limited Series, plus two lead acting awards (Paul Giamatti and Laura Linney), one supporting award (Tom Wilkinson), and prizes for its writing, art direction, casting, cinematography, costumes, prosthetic makeup, sound editing, sound mixing and visual effects. Given the success of its performances and crafts across the board, it’s kind of surprising that it didn’t win for Tom Hooper‘s directing; he lost to Jay Roach for the telefilm “Recount.”

Since “Game of Thrones” has more nominations than ever before — and nine more nominations than “John Adams” did the year it swept — there’s a good chance “Thrones” will break that record. But that might depend on how the epic fantasy fares in craft categories. The actors branch of the television academy has been more ambivalent about “Thrones,” showering its cast with nominations but rarely with wins. The only cast member who has ever prevailed for the show is Peter Dinklage, who won Best Drama Supporting Actor in 2011, 2015 and 2018, which means “John Adams” won as many acting prizes in one year as “Thrones” has in its entire run.

To break the “John Adams” record, “Thrones” will have to win 60% of those prizes. Do you think it will? Vote in our poll below.