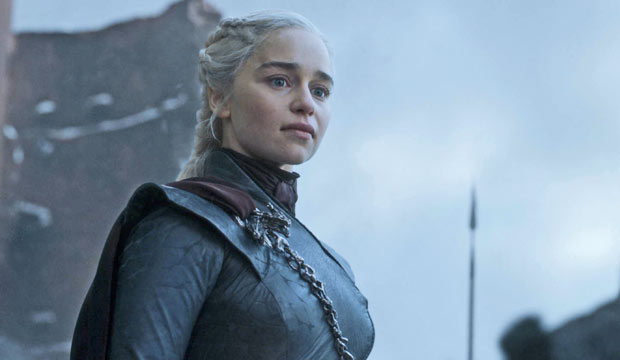 As of this writing it has been almost a week since the “Game of Thrones” finale, but be forewarned: there are SPOILERS AHEAD!

The eighth and final season of “Game of Thrones” was nothing if not controversial, with tons of plot twists compressed into just six episodes, prompting an online petition to scrap these last half dozen installments and try again. Daenerys Targaryen’s storyline was one of the most contentious, so it came as a bit of a surprise to me that her portrayer, Emilia Clarke, was our readers’ choice as the “Thrones” MVP most deserving of an Emmy for this season. Scroll down for our complete poll results.

The Mother of Dragons was always a morally ambiguous character, making rash and ruthless decisions in her quest for the Iron Throne. But many viewers were frustrated by how abruptly she went all the way to the dark side, incinerating scores of innocent men, women and children, unprompted, in the penultimate episode “The Bells.” Then in the finale she was abruptly killed by Jon (Kit Harington) and unceremoniously flown off by her grieving dragon Drogon.

Nevertheless, a plurality of fans thought Clarke was the best in show this season. About one-third of respondents (34%) elected her as their queen. Perhaps it was precisely because of the high degree of difficulty of Clarke’s performance, which had to convey Daenerys’s sharp turn into villainy in just a few scenes.

Maisie Williams finished second in our poll with 21%. She played Arya, who went from youthful tomboy to hardened assassin over the course of the series. There weren’t many complains about the trajectory of her character, and she supplied one of the season’s most cheer-worthy moments when she shanked the Night King and thus obliterated his undead army.

SEE‘Game of Thrones’ finale video recap: We vent our frustrations over who was chosen for the crown [WATCH]

Peter Dinklage was next with 18% of the vote as Tyrion, who helped crown Bran (Isaac Hempstead-Wright) as the new king of Westeros following Daenerys’s downfall. Dinklage is the only member of the cast who has already won an Emmy (three in fact), so perhaps our readers thought he was well enough taken care of.

Find out below who else had support from fans. Do you think Clarke will win the Emmy in addition to handily winning our poll? 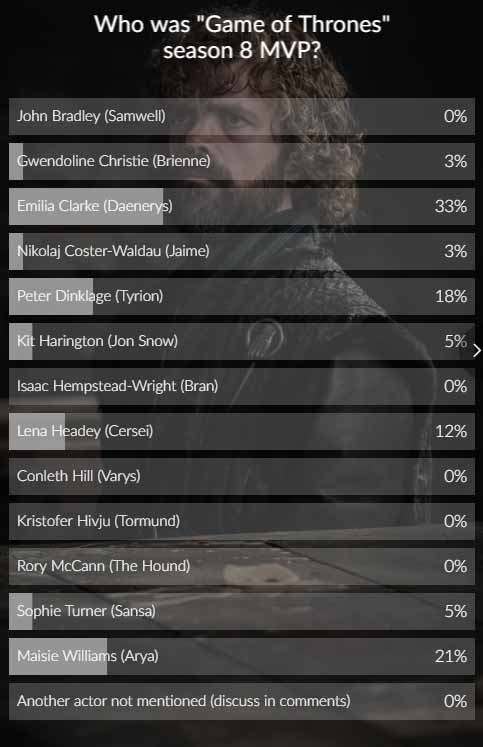