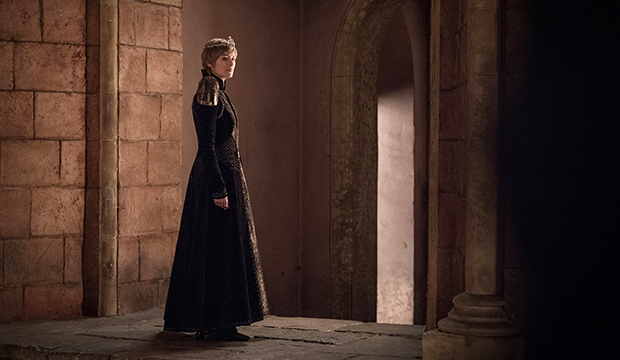 Warning: the following story contains spoilers from the May 12 episode of “Game of Thrones,” titled “The Bells.” Read at your own risk!

Lena Headey is a four-time Emmy nominee for her villainous role as Cersei Lannister on HBO’s fantasy epic, but after Sunday’s episode, could she finally win? During the penultimate installment of “Game of Thrones,” Cersei watched as the city she (sorta) loved burned to a crisp thanks to the Mad Queen, aka Daenerys Targaryen (Emila Clarke). As everyone around her was killed off one by one, Cersei ultimately reunited with her brother/lover/baby-daddy Jaime Lannister (Nikolaj Coster-Waldau). Cersei tearfully confessed to Jaime that she wanted to live so that their baby could be born, but then the castle crumbled around them and they were killed.

SEEEmmy spotlight: Emilia Clarke could ride the dragon-size wave of support for ‘Game of Thrones’ to her 4th nom

Our readers have been discussing every aspect of “Game of Thrones” Season 8, Episode 5 in our fun and fiery TV forums, where reactions are mostly focusing on Headey’s performance. Is the English actress on her way to winning her first Emmy Award as Best Drama Supporting Actress? Read a brief sampling of our forum posters’ comments below and then be sure to join the discussion to give us your thoughts.

Marcus Snowden: “Although I have a TON of misgivings about how Cersei went, I have to admit that Lena Headey was amazing tonight. She gave it everything she had, and she deserves an Emmy for that crying scene alone.”

Paulsonalypse: “I’m heartbroken. Seeing Cersei cry for the first time. What a moment.”

Mason: “Maisie Williams is definitely getting nominated. Kit Harington was great too.”

England: “Supporting Actress at the Emmys is going to be competitive as hell.”

Seven: “Emilia acted the hell out of this episode. Madness suits her well.”

Stegeo: “Lena is an amazing actress. The fact she made me feel sorry for her character after last episode. I mean, the Emmys can pull off a random win on her. I’ll never stop having faith.”

Kellis: “Lena deserves the Emmy just on her last few lines and her crying alone (Emmys don’t let us down anymore).”