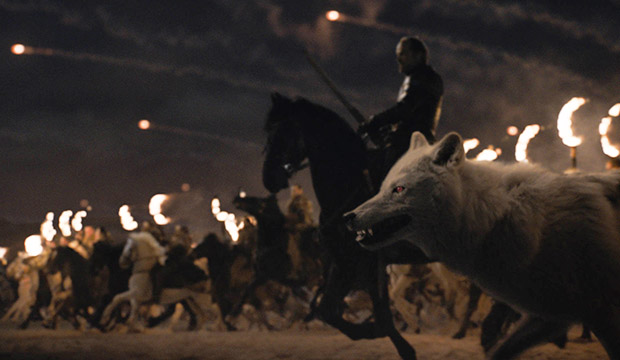 “Game of Thrones” has never won a Screen Actors Guild Award for acting, but it is undefeated in another category there: TV stunt ensemble. The fantasy epic has gone 7 for 7 so far, and there is absolutely no reason not to believe it will close out its run with a perfect 8-for-8 record.

In our early odds, “Thrones” is sitting pretty in first place, followed by defending champ “GLOW,” “Watchmen,” “The Walking Dead” and “Stranger Things.”

“Thrones” was ineligible last year since it didn’t air in 2018, which was great news for “GLOW.” But that means “Thrones” won’t be able to lay claim to winning eight consecutive years now. Oh, darn. While Season 8 of “Thrones” was “not great, Bob” for other reasons (*cough* the writing *cough*), its fight sequences and stunts are practically unimpeachable. And it had a nearly 90-minute long episode devoted to an enormous battle, even if you couldn’t really see most of it.

Since the stunt category was added at the 14th ceremony in 2008, “Thrones” is just one of two shows with multiple victories; “24” won the inaugural award and again two years later. The only other winners are “Heroes,” sandwiched in between the twin “24” wins, and “True Blood,” the last non-“Thrones” champ before “GLOW.”

While “Thrones” would extend its winning record, the opposite would happen for “The Walking Dead, which is on its eighth nomination as well and is staring down an 0-8 record. But since the zombie series won’t die, maybe it could finally win next year with “Thrones” out of the way for good.