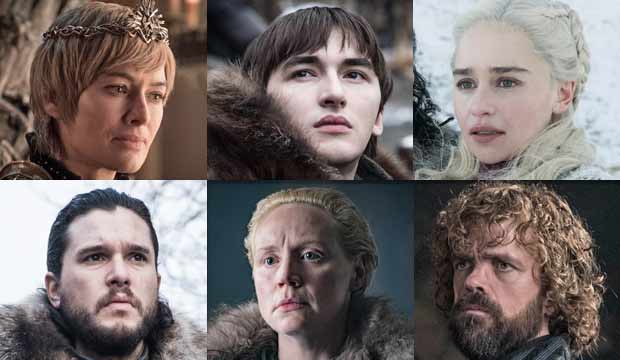 “Game of Thrones” has had a rocky season, with some fans campaigning to remake the last episodes. But even if you have misgivings about the direction the story took and the speed at which the show took it, you can’t fault the actors. So who do you think was the season eight MVP and is most deserving of an Emmy after all is said and done. Scroll down to vote in our poll at the bottom of this post. SPOILERS AHEAD!

HBO’s epic fantasy series has won more Emmys than any other primetime comedy or drama series in history (the only program with more trophies is the late-night sketch comedy “Saturday Night Live”). But for the most part the show’s actors haven’t come along for the ride. Peter Dinklage (Tyrion) won Best Drama Supporting Actor a record-tying three times, but that’s it. Despite repeated nominations for many of his co-stars, no one else has ever won.

Tyrion had multiple standout moments in season eight, including his farewell to his brother Jaime (Nikolaj Coster-Waldau) in “The Bells” and a couple of meaty speeches in the series finale, “The Iron Throne.” But this season also showcased Dinklage’s co-stars in a significant way, including Maisie Williams (Arya) slaying the Night King and fleeing a crumbling King’s Landing, Lena Headey (Cersei) coming to realize her fate in the Red Keep, Emilia Clarke (Daenerys) cracking under the pressure as her friends, loves and allies either died or deserted her, and Kit Harington (Jon Snow) as one of those loves who must decide where his allegiance lies.

Sophie Turner (Sansa) fully came into her own, advocating for her people in Winterfell and ultimately becoming their sovereign queen. And Gwendoline Christie (Brienne) finally achieved her dream of becoming a knight and consummated her relationship with Jaime only for him to desert her to try to save his sister.

SEE‘Game of Thrones’ reactions for ‘The Iron Throne’: [SPOILER] ‘was done beautifully’ … ‘the last episode was excellent’

HBO already revealed to us who they’re submitting for Emmy consideration, but regardless of who’s on the ballot, who do you think is most deserving of a triumphant Emmy payoff after these topsy-turvy final six episodes?