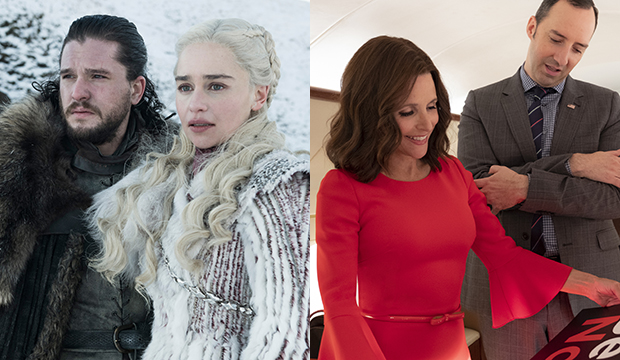 You know what they say: It’s not the length of your, uh, season, but what you do with it. If HBO’s departing cornerstones “Game of Thrones” and “Veep” win Best Drama Series and Best Comedy Series, respectively, as predicted, their combined episode total for their final seasons would be the lowest ever to win those two categories.

There are only six episodes in “Game of Thrones” Season 8 and seven in “Veep” Season 7 — the shortest seasons ever for both — which means their grand total comes to 13. That’s how long one season of most cable shows is. That was the length of each of “Mad Men”‘s four Emmy-winning seasons. Now, 13 might be the total output of the drama and comedy champs.

“Game of Thrones” already set a record last year when its seven-episode seventh season became the shortest season to win Best Drama Series, eclipsing the dual eight-episode outings for “Breaking Bad”‘s two wins. So “Game of Thrones” would break its own record this year. “Veep” would not set the record on the comedy side; that is held by “The Wonder Years,” which triumphed with its six-episode first season in 1988. “Veep” would assume second place, dethroning reigning Best Comedy Series champ “The Marvelous Mrs. Maisel,” which prevailed with eight episodes. (Yes, this means last year’s drama and comedy champs only had 15 episodes between them.)

These days, with so many options, there’s hardly enough time for voters and fans alike to consume 24 hour-long episodes. Shorter seasons are much more attractive, especially if you need to catch up over a weekend before casting your vote.

In the case of “Game of Thrones” and “Veep,” both are long-running, successful shows that have the opportunity to end on their own terms, a luxury not afforded to a majority of TV shows. Their brain trusts knew the stories they wanted to tell to cap everything off without having to deal with any dreaded filler episodes. (#neverforget the basis of “The Good Wife”‘s 2014 Emmy campaign was that it had to churn out 22 episodes while its cable and streaming rivals barely cracked double digits in their episode counts.)

At the Television Critics Association winter press tour in February, “Veep” showrunner David Mandel explained that the choice to do seven episodes, versus the show’s usual 10 (Season 1 had eight), came about organically.

“I knew where the show was going to end, and then it was sort of a matter of how long would it take to get to the end, and we didn’t know, and we sort of were given a chance, a wonderful chance by HBO to sort of explore and figure what that meant, and if it meant two years or two years and a movie or a year or whatever it was going to be,” he said. “And we reached just a very natural point storytelling-wise that we sort of, kind of looked at each other and kind of went, I think that’s the end, that’s right. And, so, I can only tell you they’re crazy, jam-packed episodes. I think you’ll find that there’s more than 10 episodes worth of material jammed into them, but I don’t know if there was any, like, great whatever to the decision.”

As new shows get announced and released every day, sub-10-episode seasons will become increasingly common (even the cable standard of 13 feels like a lot now), but at least we know with the Emmy rules, which requires at least six episodes a season, we’ll never have a sub-12 total between the drama and comedy winners.