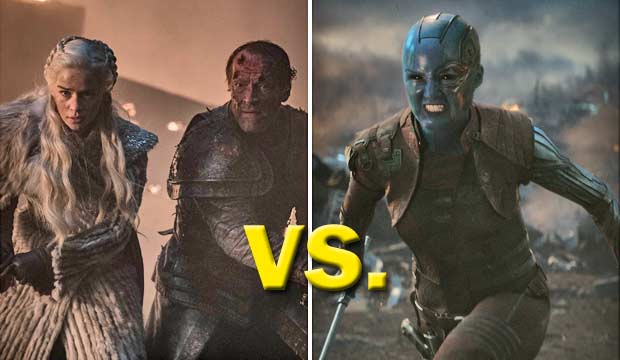 SPOILERS ABOUND! If you haven’t seen “Avengers: Endgame” or “Game of Thrones” episode three, “The Long Night,” READ NO FURTHER. But if you have seen them, scroll down to vote in our poll at the bottom of this post because the weekend of April 26-28 saw two highly anticipated pop culture showdowns, both of which were a decade in the making. So which climactic battle was better?

“Avengers: Endgame” impressed critics and demolished box office records with the final confrontation between the title team of heroes and Thanos (Josh Brolin) and his merciless alien horde. If nothing else, you’d be hard-pressed to find a more crowded battle. After the Hulk (Mark Ruffalo) snapped half of the characters back into existence with the Infinity Stones (which accidentally led Thanos right to them), it was time for everyone to face off.

That included Iron Man (Robert Downey Jr.), Spider-Man (Tom Holland), Captain Marvel (Brie Larson) and basically the entire casts of “Black Panther,” “Guardians of the Galaxy,” “Doctor Strange,” “Ant-Man,” and every other intellectual property Disney owns the rights too — except the Jedi, but maybe they’re saving that for stage four of the Marvel Cinematic Universe. In the end, Iron Man sacrificed himself to snap away Thanos and his army, and the survivors lived to fight another day, or perhaps for the next 22 movies.

Meanwhile, on “Game of Thrones,” Daenerys (Emilia Clarke), Jon Snow (Kit Harington) and their united armies stood their ground as the Night King and his army of zombies descended on Winterfell. A few popular characters lost their lives in the battle (farewell, Jorah Mormont, Lyanna Mormont and Theon Greyjoy), but after the longest battle in television history (it lasted for basically the entire running-time of the 82 minute episode), Arya Stark (Maisie Williams) struck the final blow that killed the Night King and obliterated his army of the dead.

But unlike “Avengers: Endgame,” where the surviving characters got to live happily ever after — for now anyway — “Game of Thrones” still has three episodes left and at least one more climactic battle to come as Daenerys and Jon now set their sights on Cersei Lannister (Lena Headey) and the Iron Throne. So “GOT” may yet outdo itself in the coming weeks.

So which battle do you think was better? Vote below to let us know, and discuss this and much more with your fellow film and TV fans in our forums.