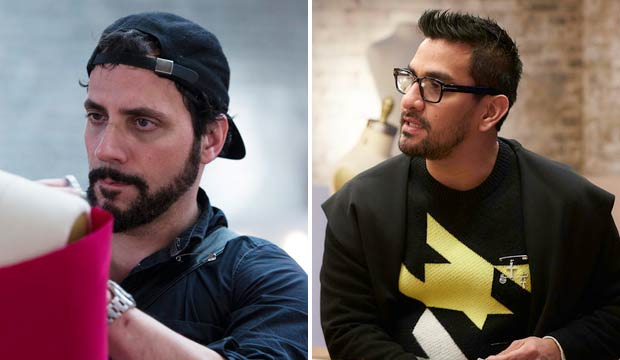 For weeks our “Project Runway” odds have indicated a two-way race between the consistent polish of Sebastian Grey and the adventurous eccentricity of Hester Sunshine. However, with only five designers left in the competition, Sunshine has plummeted, while Garo Sparo has moved up. Now we’re predicting an all-male top three. Do you agree with this sudden shift? Make or update your own predictions here before Thursday night’s new episode.

Our odds are calculated by combining the predictions of “Runway” fans we poll every week in our predictions center, and this week they’re still high on Grey’s chances. In last week’s 11th challenge, “New York City of Dreams,” he had to create a look for an NYC civic employee that pushed its creativity to its limits. His client wanted a vintage Disney princess feel, which Grey had to translate into a look that felt modern and also true to his aesthetic.

He nailed it (though judge Elaine Welteroth expressed a dissenting opinion that his design was dated), and he won the challenge. It was his second victory of the season following his week-two triumph in “The Future is Here,” and he’s still the only designer in the competition without a single low score from the judges. That cements his status as the front-runner; most of our users say he’ll win the whole season, giving him leading odds of 7/4.

Garo Sparo has been less consistent over the course of the season. He got a low score in “All the Rage” and was very nearly eliminated in “What Do You Care About?” His bold corseted designs are always right on the edge between couture and costume, but he redeemed himself in “City of Dreams,” placing second in the challenge behind Grey. He’s also one of the most experienced designers in the competition, one of the most calm and collected, and one of the most polished. When you combine all that with the fact that he has such a clear point of view as a designer, you can’t deny that he’s a threat to win. We currently rank him second with odds of 31/10.

SEEShould ‘Project Runway’ have given Christian Siriano a Save just like Tim Gunn? [POLL]

Sunshine still has the most challenge wins this season (three), but her last two looks haven’t been up to her usual standard; she may have been even more disappointed in them than the judges were. And if Garo’s aesthetic is borderline-costume, then Sunshine’s is close to circus-wear. At her best, I love her playful designs, but she’s always at the greatest risk of going off the rails, so if she’s having a crisis of confidence, she might not make it to the finale. Now we have her down in fourth place with 7/1 odds, under Bishme Cromartie with 82/25 odds. Tessa Clark is the biggest underdog, ranked last with 30/1 odds. Do you agree with our odds? Or will the women rebound?