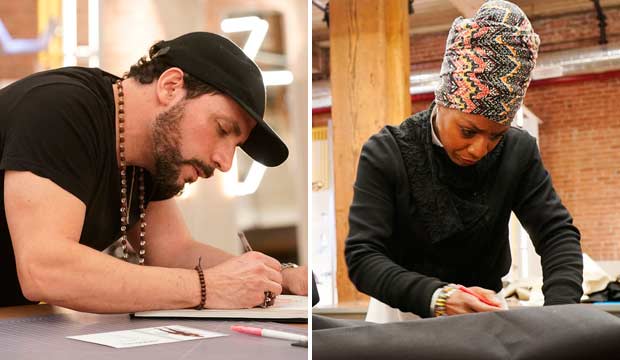 “Project Runway” enters its third week of competition following two episodes of tears, tension and team turmoil that had multiple designers at their wits’ end. But a couple of contestants who were at the center of the drama weathered the storm and have actually risen in our predictions for who will win the entire competition: Garo Sparo and Renee Hill.

Garo Sparo was assigned to a wholly incompatible team last week with the excitable Hester Sunshine and the no-nonsense Nadine Ralliford. It seemed like they were destined for the bottom of the judges’ scores, but they made it through safely. However, only one of them got a bump in our predictions. According to the combined forecasts of Gold Derby users, Garo Sparo is now the front-runner to win the season with leading odds of 12/5 as of this writing. He knocks Ralliford down to second place; perhaps our readers think his tactic of keeping his head down will serve him better in the long run than Ralliford butting heads with Sunshine.

Hill moves up into third place this week with 11/2 odds, even though her team did land in the bottom three. But she had a high score in the season premiere, so the judges seemed to give her the benefit of the doubt, assuming her work was compromised by her collaboration with teammates Frankie Lewis and Kovid Kapoor, who got the lion’s share of the judges’ ire. Lewis was eliminated, Kapoor survived by the skin of his teeth, and Hill is free of the constraints of a team challenge, so now we can see whether last week’s low score was a fluke, or if maybe her high score in the premiere was the fluke.

Surprisingly, neither of the two design challenge winners so far rate very highly in our predictions. Tessa Clark won the first design challenge, and then she was on the winning team in the second challenge, where her teammate Sebastian Grey was declared the winner. But Grey trails in fifth place with 11/1 odds, while Clark is sixth with 18/1 odds. Granted, it’s early yet, and winning the initial challenges is no guarantee of continued success. As they say, in the world of fashion, one day you’re in and the next your out, so perhaps it’s wise to keep hedging your bets as the competition unfolds.