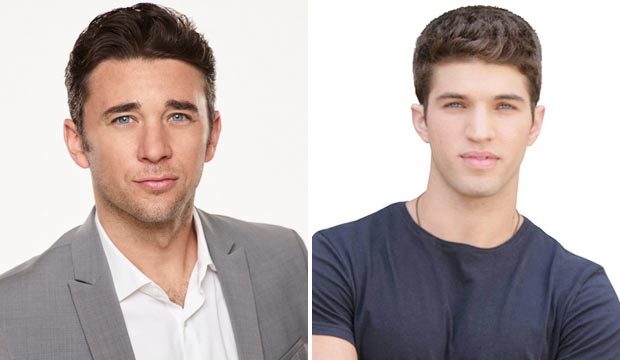 Should “General Hospital” recast the presumed-dead Morgan Corinthos with a recent “Days of Our Lives” alum? There are no official reported plans to resurrect the character as of this writing, but a Twitter exchange prompted speculation about the possibility of Billy Flynn moving from Salem to Port Charles to pick up where Bryan Craig left off. What do you think? Scroll down to vote in our poll at the very bottom of this post.

Mob scion Morgan was born on-screen on “GH” in 2003, the son of crime boss Sonny Corinthos (Maurice Benard) and Carly Corinthos (currently played by Laura Wright). He was portrayed by a few different child and teen actors over the years before he was rapidly aged into young adulthood with the casting of Craig in 2013. Craig stayed with the show until 2016, and ended up winning two Daytime Emmys for Best Younger Actor (2016-2017), thanks in large part to a storyline in which he struggled with bipolar disorder, an illness he shared with his father.

But being a mob heir is not without other risks. When Craig decided to leave “GH” the show killed off Morgan in a car bombing, though no body was found, leaving the door open for the character to return. But Craig is busy these days: he’ll be appearing later this year in the ABC primetime drama “Grand Hotel,” so he probably won’t be available for a long-term “GH” return in the immediate future. But even he gave Flynn his blessing on Twitter when “GH” star William deVry suggested that Flynn “would make a good Morgan should he ever appear again.”

And Flynn knows a little something about nefarious families. On “Days” he played Chad DiMera, the son of crime lord Stefano DiMera (the late, great Joseph Mascolo). Flynn earned a Daytime Emmy nomination for Best Actor in 2017, and he’s pre-nominated again this year, but he left the show in February when Chad and his love interest Abigail (Kate Mansi) walked off into the sunset together. Should “GH” take the opportunity to bring Flynn on-board? See deVry, Flynn and Craig’s tweets below, and vote in our poll.

Haha. Hey @billymflynn you would make a good Morgan should he ever appear again. I hear @bryan_craig is otherwise booked. Ha. https://t.co/GuPZye9Bow

Haha. I do believe I would give it my best shot ; ) haha that escalated quickly from getting a few autographs. My buddy Ken worked with Brian on his new show. He’s great.

You’d be a great Morgan . Thanks for kind words brother