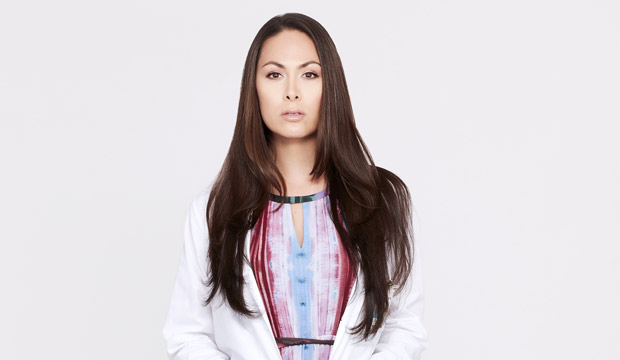 “Pride as an Asian-American transgender woman means to me an opportunity to be visible, and I’m so honored and grateful to ‘General Hospital’ and ABC as a network for allowing me to be visible and to continue to contribute to the narrative of my beautiful transgender community,” says Cassandra James. She’s a transgender actress who plays transgender doctor Terry Randolph in the ABC soap. “GH” shared her special Pride message with fans on Twitter. Scroll down to watch it at the bottom of this post.

“It’s not lost on me the importance of the work that I’m doing, the importance of Terry, the character that I play, who is an out trans woman, who is a doctor, who has love and support from her friends in Port Charles,” the actress adds. “I think it’s fair to say that these types of portrayals are still quite rare, but their resonance is great.” Soap operas have been around for as long as television has been around, but they were slow to embrace LGBT characters and storylines over the years. However, the tide has been turning over the last two decades.

On “All My Children,” Erica Kane‘s daughter Bianca (Eden Riegel in an Emmy-winning role) came out of the closet in the early 2000s. And throughout the 2000s there were a few standout same-sex supercouples, like Luke and Noah on “As the World Turns,” Fish and Kyle on “One Life to Live,” Olivia and Natalia on “Guiding Light.” The doors opened a little wider in the 2010s with gay love triangles on “Days of Our Lives” and a love story between a transgender woman and a cisgender man on “The Bold and the Beautiful.”

“I want the transgender community to feel well represented and well loved by this amazing industry that I’m a part of. The work that ‘General Hospital’ and ABC has and continues to be committed to certainly makes me proud,” James concludes. She has been recurring on “GH” since one year ago when she joined the cast in June 2018. She was pre-nominated for Best Guest Performer at the Daytime Emmys, but didn’t make the final list of nominees.

SEEChandler Massey (‘Days of Our Lives’) still feels Pride for his groundbreaking gay character: ‘It warms my heart’ [LISTEN]

We’re proud to celebrate #PrideMonth with @cassandrajames_. All are welcome in Port Charles. #TransIsBeautiful #GH pic.twitter.com/ArdSw1FG2T