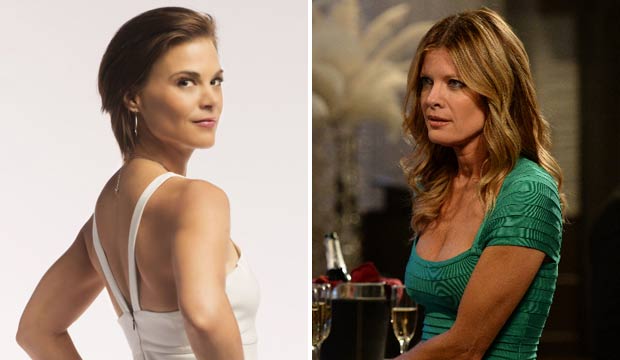 Get ready for a major soap swap. It was recently reported that Michelle Stafford is leaving “General Hospital” and will be returning to the role that made her a star: Phyllis Summers on “The Young and the Restless.” Unfortunately, that means the actress currently playing Phyllis, Gina Tognoni, is out. What do you think of the actress switch? Scroll down to vote in our poll at the bottom of this post.

Stafford played Phyllis on and off for almost 20 years, first joining the cast in 1994 and ultimately leaving in 2013. In that time she earned 10 Daytime Emmy nominations, winning Best Supporting Actress in 1997 and then Best Actress in 2004. After her exit from the CBS soap she joined the cast of “GH” as Nina Reeves in 2014, and  she’s been playing her ever since.

Tognoni took over as Phyllis in 2014, but by then she was already well known to daytime fans. Her breakthrough role was as Kelly Cramer on “One Life to Live,” and then she won two Emmys for Best Supporting Actress (2006, 2008) for playing Dinah Marler on “Guiding Light.” She had big shoes to fill on “Y&R,” but her performance was well received by her industry peers: She was nominated for Best Actress in 2015 and won in 2017.

Tognoni commented on her impending exit on Instagram: “I am beyond grateful for the creative experience that ‘The Young and the Restless’ has given to me as well as the amazing relationships I made with the cast, crew/staff, producers, and writers. I love my Genoa City family.” See what some of our forum posters are saying about the sudden switch and read Tognoni’s complete Instagram post below before voting in our poll.

FreemanGriffin: “I have been hoping for this all this time and it is finally happening! One of the things I have missed on ‘Y&R’ is the wonderful chemistry between Christian LeBlanc’s Michael and his best gal pal Phyllis, but he only has chemistry with MS and not at all with GT. While others thought Gina was great in the role I found her to have a lack of humor in her portrayal.”

Sean Phillips: “I can really go for this. Nina is really an unneeded character on ‘GH’ … The actress deserves better.”

linecelts: “I was stunned by this. I was so used to Gina T. Part of me is NOT happy about this.”

EmmyLoser: “This is wonderful news for Stafford and for ‘Y&R.’ It never felt like Gina Tognoni was playing the same character that Stafford did, in so many ways, and it’ll be great for the show to have that character back. I was at the point where I didn’t think this would ever happen.”

Boidiva02: “It does seem like a bit of a no-brainer for Michelle to return to the role she is so iconic for and that made her a star, and I’m sure we all knew it would happen at some point.”