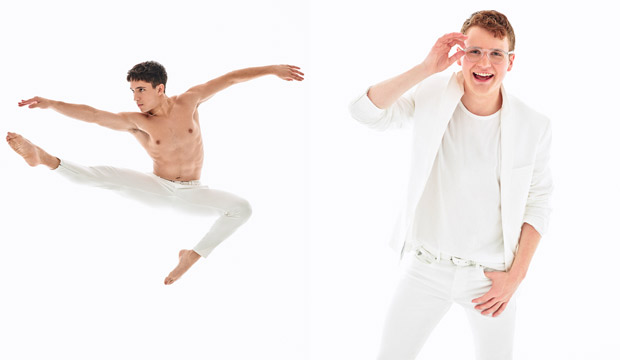 On “Top 10 Perform” night on “So You Think You Can Dance” we got our first look at how the dancers who survived the Academy fared on a live stage in front of a national audience. Most of the dancers got positive reviews, but judging from the judges’ critiques, contemporary dancer Gino Cosculluela and tapper Eddie Hoyt might be in trouble when the first eliminations are announced next week. But if you think they deserve to be saved, you’ve got until 9:00am Pacific/Noon Eastern today, August 13, to cast your votes.

When Cosculluela performed for the judges during the “Final Cut” round, Nigel Lythgoe called him the season’s best technical dancer. But when he was paired with Stephanie Sosa for a hip-hop routine choreographed by Luther Brown, it was a split decision: Laurieann Gibson and Mary Murphy loved them, but Lythgoe and Dominic “D-Trix” Sandoval thought Cosculluela’s performance was lacking, and everyone seemed to agree that Sosa was the highlight of their routine.

Hoyt also impressed the judges during the “Final Cut” when he stepped out of his comfort zone with a hip-hop piece, but his jazz funk number on the live stage with partner Sophie Pittman rubbed the judges the wrong way. As with Cosculluela, they all agreed that his female partner was the star of the show.

But it’s the not the judges’ opinions that matter the most at this stage of the game. Fans can vote online, on the FOX Now mobile app, or by text message. What’s more, viewers get 20 voters per method, so if you want to keep someone around badly enough, you could support them with over 100 votes depending on how many phone numbers and online accounts you have (more details on voting here). And sometimes bad reviews from the judges can be a blessing in disguise: if fans think their favorite is in danger, they’ll be galvanized to vote, while the fans of someone who performed well could be lulled into a false sense of security. So there’s hope for them yet even if they didn’t get off on the right foot.

'The Masked Singer' spoilers: The Frog is ...

'The Masked Singer' spoilers: The Banana is ...

Who should join the cast of 'Dancing with the Stars'? 6 female celebs on our wish list, and many more…