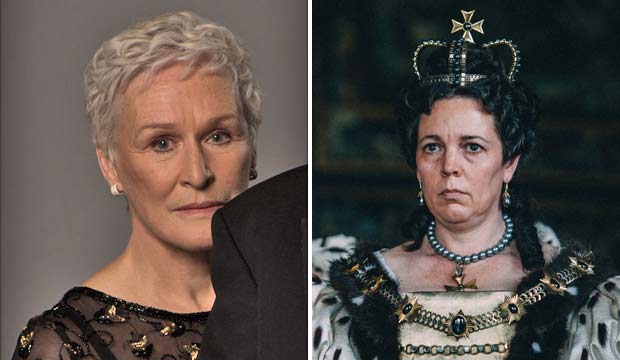 The race for Best Actress at the Oscars was up in the air until the Golden Globes. Glenn Close‘s surprise victory there over Lady Gaga (“A Star is Born”) started a wave of momentum for the veteran Oscar-less actress that continued with wins at the Critics’ Choice and SAG Awards. But now it may not be Lady Gaga who is her biggest threat. Our predictions indicate Olivia Colman (“The Favourite“) is the dark horse to watch for.

Close is still way ahead with leading odds of 31/10 odds. The Editors who cover awards year-round for Gold Derby are unanimous that Close will win. She’s also backed by overwhelming majorities of our Top 24 Users who got the highest scores predicting last year’s Oscars, and the All-Star Top 24 who had the best predictions when you combine the last two years’ Oscars. The Expert journalists we’ve polled from top media outlets are also almost unanimous … emphasis on almost.

As of this writing our Expert Thelma Adams (Gold Derby) is going out on a limb to predict a Colman upset. So are two of our Top 24, Harrison Davies and elijahwouldnt, who both correctly predicted 22 out of 24 categories at the Oscars last year, so that’s a minority report you might want to consider.

On paper, a Colman victory sure looks likely. She stars in a film that’s tied for the most nominations this year (10), That’s way more than “The Wife,” for which Close is the only nominee. Colman also plays real-life royalty, the frail and eccentric Queen Anne. In recent years Helen Mirren (“The Queen,” 2006) and Colin Firth (“The King’s Speech,” 2010) have won Oscars for playing monarchs, and Meryl Streep (“The Iron Lady,” 2011) was also a winner as a British politician.

SEERachel Weisz celebrates her first BAFTA win for ‘The Favourite’: ‘Olivia Colman and Emma Stone made my performance better’

Colman also just won the BAFTA Award for Best Actress. Granted, she was the hometown favorite — no pun intended — and she was already a darling of the British academy with three previous wins for her work on TV, but the BAFTA voting membership overlaps with the Oscars, so we mustn’t discount it as a potential signal of things to come.

However, Close didn’t have an overdue narrative at the BAFTAs like she does at the Oscars. In fact, this was only the second BAFTA nomination of her entire career, so the fact that she was even nominated by the Brits might be a sign of her strength in the overall awards derby. Though Close is the only Oscar nomination for “The Wife,” this is her seventh bid from the American academy, and she still hasn’t won yet. Another loss would make her the most nominated actress in Oscar history without a victory. As with Julianne Moore, who was the sole nominee for “Still Alice” (2015) when she won, the academy may be eager to finally honor her after years of unrewarded work.