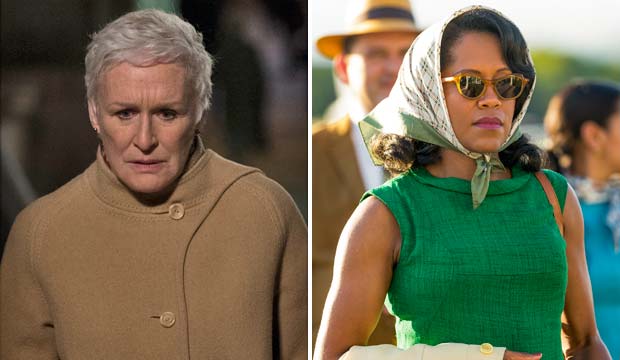 It makes logical sense to assume that films with Best Picture nominations will have more support in other categories too, but the two women currently out front in our predictions to win acting Oscars — Glenn Close for Best Actress (“The Wife”) and Regina King for Best Supporting Actress (“If Beale Street Could Talk”) — are in films not nominated for the top prize. If our odds are right, that will make this the first time in 13 years that neither female acting winner comes from a Best Picture nominee.

The last time it happened was 2005, when Reese Witherspoon won for her leading role in “Walk the Line” and Rachel Weisz prevailed for her supporting performance in “The Constant Gardener.” Both of those films had multiple nominations, but neither contended in the top race. Every year since then, though, one or both female acting champs have come from Best Picture contenders. All winners since then are listed below, with the Best Picture nominee highlighted in gold.

SEE2019 Oscars: How many women are nominated beside the 10 acting contenders (Hint: still not enough)

Of course, there’s an additional factor that plays a role in these recent stats: the academy expanded Best Picture in 2009. Ever since, there has never been a year when both female winners came from non-Best Picture nominees. And looking back at that 2005 race, there’s a pretty good chance that “Walk the Line,” “The Constant Gardener” or both would have been nominated for Best Picture if there had been as many as 10 nomination slots that year.

This year Close is up against three Best Actress nominees with corresponding Best Picture bids: Yalitza Aparicio (“Roma”), Olivia Colman (“The Favourite”) and Lady Gaga (“A Star is Born”). In fact, Close is the only nomination for “The Wife,” but that was also true of Julianne Moore the year she won for “Still Alice.” And as was the case for Moore, Close has been nominated for Oscars repeatedly without a win, so voters may feel the urge to finally give it to her even if her film doesn’t have strong support overall.

All four of King’s rivals are from Best Picture nominees: Amy Adams (“Vice”), Marina de Tavira (“Roma”), and Emma Stone and Rachel Weisz (“The Favourite”). But this race is still wide open. While King swept the critics’ awards and claimed the Golden Globe, she was snubbed at both the SAG Awards and BAFTAs, which opens the door for the rest of the field.