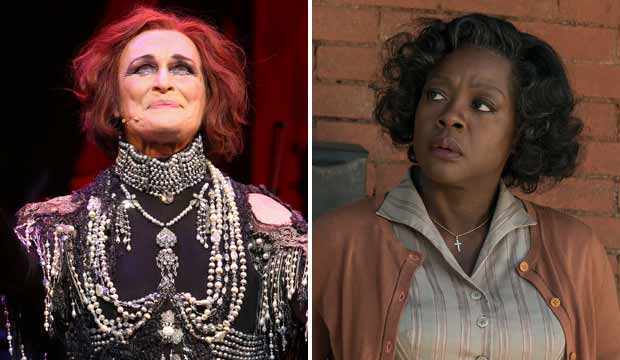 At this year’s Oscars, Glenn Close (“The Wife”) ended up losing Best Actress to Olivia Colman (“The Favourite“) in what was the biggest shocker in the Best Actress category since 2011 when Viola Davis (“The Help”) lost to Meryl Streep (“The Iron Lady”). But Davis got her revenge a few years later when she reprised her Tony-winning performance as Rose Maxson in the film version of “Fences,” for which she won Best Supporting Actress. With the recent announcement that Close is officially reprising her own Tony-winning role as Norma Desmond in a “Sunset Boulevard” movie musical, can she follow in Davis’s footsteps?

Leading up to the 2011 Oscars, Viola Davis won Critics’ Choice and SAG Awards for “The Help,” in which she played Aibileen Clark, a black maid in Mississippi during the civil rights movement in 1963. But Meryl Streep beat her at the Golden Globes (in Best Film Drama Actress) and the BAFTAs for playing real-life British Prime Minister Margaret Thatcher. In the end BAFTA proved to be the more telling Oscar tea leaf: Streep won her third Oscar, which was her first victory in 29 years following her second prize for “Sophie’s Choice” (1982).

But Davis got another shot at Oscar. In 2016 she reunited with her Broadway co-star Denzel Washington for the film adaptation of August Wilson’s “Fences” (which Washington also directed). It tells the story of Troy Maxson (Washington), a garbage man in 1950s Pittsburgh, Pennsylvania, doing the best he can to scrape by and provide for his family. His wife Rose (Davis) is a loyal companion who sometimes has to manage her husband’s drinking and outbursts. Davis ended up sweeping through the awards season that year, winning Best Supporting Actress at the Golden Globes, SAG Awards, Critics’ Choice Awards, BAFTAs and, finally, the Oscars.

This year followed a similar trajectory. Glenn Close won the Golden Globe (in Best Film Drama Actress), the Critics’ Choice Award (in a tie with Lady Gaga for “A Star is Born”), and the SAG Award for “The Wife,” where she played Joan Castleman, a woman who questions her life choices as she travels to Stockholm with her husband, Joseph (Jonathan Pryce), who is set to receive the Nobel Prize in Literature.

A few days after the Oscars it was officially announced that a film adaptation of Andrew Lloyd Webber’s “Sunset Boulevard” musical will officially be moving forward with Glenn Close reprising her stage role as fading movie star Norma Desmond. If she ends up finally winning the Oscar, it would be sweet poetic justice, not just because it would mirror Davis’s “Fences” victory but because it would make up for Gloria Swanson losing Best Actress for the original film version of “Sunset Boulevard” to Judy Holliday (“Born Yesterday”) back in 1950. She’s ready for her closeup.