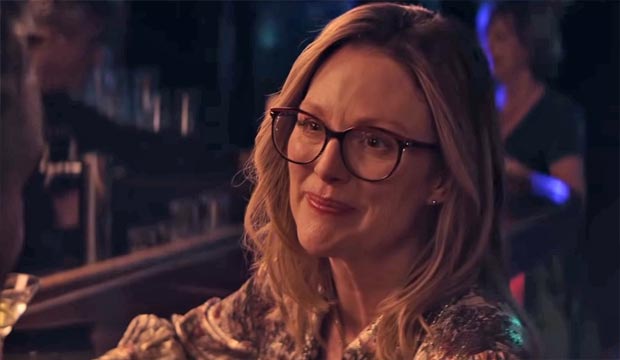 Is it too early in the year for an Oscar front-runner for Best Actress? Probably, but the reviews for Julianne Moore‘s performance in “Gloria Bell,” which opened on March 8 from A24, would be the envy of most stars opening their films right in the sweet spot of the fall season awards calendar.

“Gloria Bell” is a remake of the 2013 Chilean film “Gloria” by director Sebastian Lelio, who also directs this American version. Since that original film was released Lelio has made even more of a name for himself by winning Chile its first Oscar for Best Foreign Language Film with “A Fantastic Woman” (2017), which was also the first film starring a transgender actress to win that prize. Then Lelio made his English-language debut in 2018 with the romantic drama “Disobedience” starring Rachel Weisz and Rachel McAdams as star-crossed lovers in an Orthodox Jewish community.

This film continues Lelio’s winning streak with critics. As of this writing it has a MetaCritic score of 83 based on 20 reviews, all of them positive. The film is also rated 100% fresh on Rotten Tomatoes based on the 32 reviews that have been tallied there so far. Moore’s performance as the titular free-spirited divorcee is being described as “transcendent” and “vulnerable.” She’s a “virtuoso of restraint,” “radiates joy,” and “dances her way through … like the queen she is.”

But will the Oscars remember her 10 months from now? Recent Oscar-winning films “Get Out” (2016) and “Black Panther” (2017) opened even earlier in their respective years, though those were box office blockbusters that had no trouble getting exposure. Nevertheless, A24 has a fairly strong track record when it comes to getting its actors noticed, including the winning performances by Brie Larson (“Room”) and Mahershala Ali (“Moonlight”) and nominated turns by Saoirse Ronan and Laurie Metcalf (“Lady Bird”) and Willem Dafoe (“The Florida Project”).

Check out some of the reviews for the film below, and join the discussion on this film and more with your fellow movie fans in our forums.

Sara Stewart (New York Post): “Sebastián Lelio’s remake of his 2013 Chilean movie ‘Gloria’ is, indeed, a glorious celebration of Julianne Moore at her peak. Playing a divorcée who refuses to go quietly into the invisibility of middle age, Moore dances her way through this intimate dramedy like the queen she is … If the world ends, says Gloria, ‘I hope I go down dancing.’ She makes a good case for it.”

Leah Greenblatt (Entertainment Weekly): “Through it all, Gloria carries on: singing wildly along to her car radio, chatting amicably through a bikini wax, getting stoned alone on the living-room floor. And Moore — vulnerable but undauntable — lives every moment in her skin, fantastic to the last glorious frame.”

Manohla Dargis (New York Times): “The title character in ‘Gloria Bell’ — played by a transcendent Julianne Moore — is a restless life force … As a performer, Moore can go big, and a terrible yowl here pierces the heart. But she’s a virtuoso of restraint. She shows you the rush of emotions just before they break the surface, so the hurt and confusion flicker on her face like minute shifts of light.”

Katie Rife (The A.V. Club): “The slimness of the plot—and its familiarity, if you’ve seen Lelio’s original film—also allows the viewer to focus on Gloria Bell’s true raison d’être: the one and only Julianne Moore. Lelio’s camera lingers admiringly on Moore … Even in moments of distress for her character, Moore radiates joy and contentment, as well as the inner strength of a person who truly knows and likes herself. It’s an inspiring performance.”