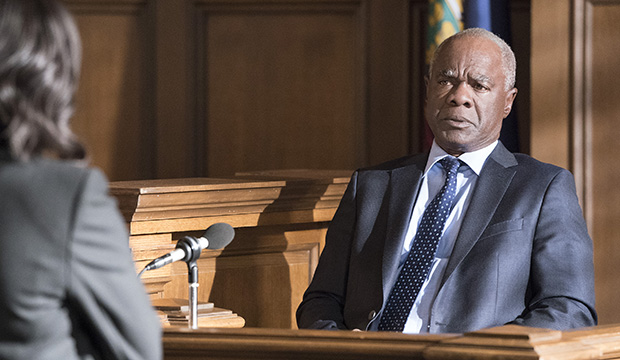 ABC’s “How to Get Away With Murder” has snuck into two Primetime Emmy Award categories through its first five seasons: leading lady Viola Davis won the Best Drama Actress Emmy in 2015, and received nominations in the two subsequent years, while Cicely Tyson snatched Best Drama Guest Actress bids in 2015, 2017 and 2018. Now, the show could get away with breaking into the drama guest actor race, thanks to Glynn Turman’s turn in the show’s fifth season.

Turman’s character, Nate Lahey Sr., was first introduced in the show’s fourth season, when Annalise (Davis) wanted him to be part of her class action lawsuit against the Commonwealth of Pennsylvania. Due to ineffective counsel, and despite an improper investigation, Nate Sr. received an unfair sentence after pleading guilty to a 1983 drug crime. His eventual time in solitary confinement then caused great harm to his mental state, resulting in him beating a provocative inmate to death. When Annalise finally has her lawsuit heard by the Supreme Court, the jury votes in favor of it, allowing all cases involved to be retried.

SEE Glynn Turman on ‘paying homage to my father’ through Nate Sr. on ‘How to Get Away with Murder’ [EXCLUSIVE VIDEO INTERVIEW]

In Season 5, Annalise and Nate Jr. (Billy Brown) have Nate Sr. psychologically evaluated, to prove that the severe psychological damage caused by his time in solitary confinement prompted the altercation. After he’s pardoned by the state, Nate Sr. is tragically murdered by two guards during his transfer to a psychiatric facility, made to look like he had attacked the guards first.

Despite only appearing in four of the show’s 15-episode fifth season, Turman’s character was the catapult for several story developments, and ultimately the season’s focal point. Turman manages to make Nate’s trauma and the horror of being disadvantaged by an unfair justice system palpable for viewers. The fact that he meets his tragic end just when the situation takes a more positive turn may help Turman, especially since his character’s situation is incredibly timely, given our current political climate.

With the drama guest actor category often favoring veteran actors, it helps that Turman is a 50-year veteran in the industry. Plus, this wouldn’t be the first time he popped up in this category; he received his first and only Emmy nomination in 2008 for his guest appearance on “In Treatment,” which he went on to win. That being said, despite such a long career and his Emmy win, he hasn’t received the due that he arguably deserves for all the great work he’s turned in. Name recognition and respect could be enough for him to score his second Emmy bid.

SEE Emmy spotlight: Liza Weil is long overdue for inaugural bid for ‘How to Get Away with Murder’

“Murder” may not be an Emmy magnet, but it’s held its ground throughout the years, having yet to be shut out entirely. Even last year when Davis was dropped from the drama actress race for the very first time, she managed to bag a drama guest actress nod for playing her “Murder” character on “Scandal.” And it may not be shut out this year either, with Tyson again eligible in Best Drama Guest Actress and Davis potentially benefiting from a barren drama actress field.

Speaking of a barren field, defending champ Ron Cephas Jones (“This Is Us”) is the only possible drama guest actor returnee from last year’s lineup. Should “Murder” continue to be a factor in the nominations, Turman could go along for the ride and take advantage of the wide-open field.