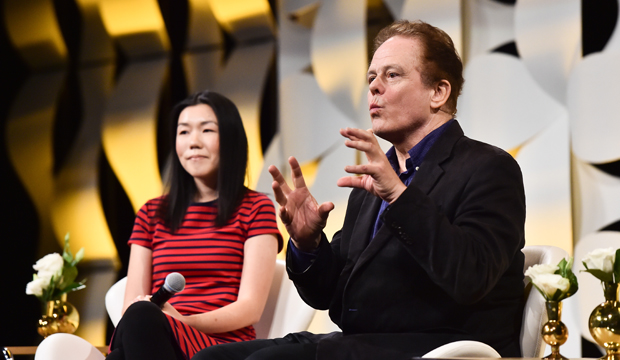 Gold Derby senior editor Joyce Eng joined me on stage at the Awards Upfront in Hollywood on Tuesday to discuss the diverse kudos coverage at our website, including the six different kinds of predictions of the 32 awards we cover in depth each year: Experts, Editors, Top 24 Users, Top 24 All Stars, All Users and Combined (Gold Derby’s official racetrack odds). What are the differences? Which ones are most accurate?

We also reviewed our many other editorial offerings – more than 30 articles that we publish every day, 500 in-depth video chats we conduct with award contenders each year, etc. – to an audience of more than 200 industry executives who attended the breakfast at Neuehouse where the kudos coverage of our sister PMC sites Deadline and TVLine were also celebrated.

The popular, jam-packed Awards Upfront event was produced and introduced by Stacey Farish, who is general manager and revenue chief of all three sites, and Bob Holmes of Holmes Communications Group.

The gala was hosted by funny lady Nicole Byer (“Nailed It,” “Loosely Exactly Nicole”), who confessed, “I love awards season – the glitz, the glamour, the gowns, the competition, the cat fights, the pettiness of it all. I just love to watch the faces of who didn’t win, because that’s true acting.”

Deadline’s presentation was deftly delivered by co-editors Mike Fleming and Nellie Andreeva plus awards guru Pete Hammond. Separately, Pete interviewed Lawrence Mark — who’s produced “Dreamgirls,” “Jerry Maguire,” “The Greatest Showman” and even the 2009 Oscars ceremony — to give an additional, inside perspective on the derby.

TVLine president, founder and editor Mike Ausiello juiced up his overview by including fun banter with Max Greenfield (“New Girl,” “The Neighborhood”), who demanded to know why he’s failed to make TVLine’s Emmy Dream Ballot.