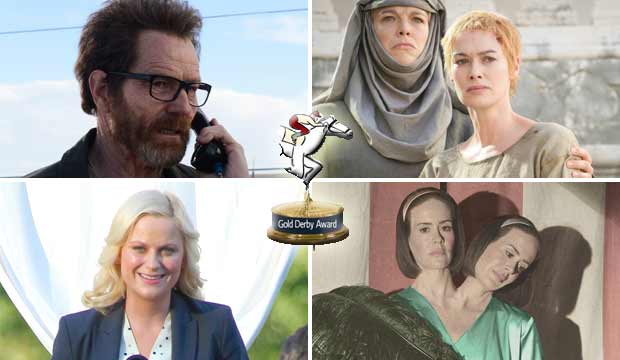 “Game of Thrones” won the Gold Derby TV Award for Best Drama Series for a record fourth time back in September, and now it’s back on top of our Gold Derby TV Decade Awards honoring the best work from 2010 to 2019. It received a leading 12 nominations from well over 1,000 registered Gold Derby users who cast their votes over the last three weeks. But it was far from the only era-defining show from the previous 10 years. Scroll down for the complete list of contenders in all 30 categories, each of which features 10 nominees.

Jump into our event now, where you can make your selections for the winners. You can vote in as many or as few categories as you like. And come back as often as you want to edit your ballot until winner voting closes on Thursday, October 31. None of your votes are set in stone until the voting period is over. Rank your top three contenders in each category in order of preference. Your first place choice gets three points. Second place gets two points. Third place gets one point. The nominee with the most points in each category wins.

In the drama field, “Breaking Bad” follows closely behind “Thrones” with 10 nominations, and right behind that with nine is “Mad Men.” Both AMC shows premiered in the late 2000s (“Mad Men” in 2007 and “Breaking Bad” in 2008), but both of them made a lasting impact in the 2010s as well. Rounding out the nominees for Best Drama Series of the Decade are “The Americans,” “Big Little Lies,” “The Crown,” “Downton Abbey,” “The Handmaid’s Tale,” “The Leftovers” and “Stranger Things.” Three of those (“Crown,” “Handmaid’s” and “Stranger”) are exclusively streaming shows; this time in 2009, streaming shows of this scale just weren’t a thing, which is a testament to how quickly the medium evolved over the last decade.

In the comedy arena, there’s a four-way tie for the most nominated show: “Fleabag,” “Parks and Recreation,” “30 Rock” and “Veep” have eight nominations apiece. That’s especially impressive for “Fleabag” since it aired only two seasons totalling 12 episodes. And it’s impressive for “30 Rock” because that show premiered in 2006 and ended in 2013; Tina Fey and Alec Baldwin actually won Best Comedy Actress and Best Comedy Actor of the Decade for 2000-2009, and they’re nominated again for 2010-2019.

Rounding out the top category are “Atlanta,” “Barry,” “The Good Place,” “The Marvelous Mrs. Masel,” “Modern Family” and “The Office.” Again, there are two representatives from the previously unheard of world of streaming, both from Amazon: “Fleabag” and “Maisel.”

The most nominated longform program is “American Horror Story” with eight. That FX anthology is considered in its entirety and not for any one particular season due to the fairly consistent continuity of its cast and production team. The two seasons of “American Crime Story” — “The People v. O.J. Simpson” and “The Assassination of Gianni Versace” — were considered separately and nominated four times apiece, so the “AHS” and “ACS” franchises both picked up eight bids.

Shows were eligible to be nominated for our awards if they aired between 2010 and 2019 and earned nominations at either the Emmys or Gold Derby Awards. Some programs were nominated in multiple genres. For those that became regular series after originally competing as limited or miniseries (like “Downton Abbey” and “Big Little Lies”), we moved them to the regular series race (even though the second season of “BLL” is not considered for the purposes of these awards).

We moved “Sherlock” into the limited category from Best TV Movie, since the series is being considered in its entirety and not for one specific film (it ended up earning nominations for its actors but not for Best Limited Series). Each anthology show was also categorized as a limited series (e.g. “True Detective,” “American Crime”) save the aforementioned “American Crime Story” seasons.

So vote now! Check out the complete list of nominations and nomination tallies below.

Game of Thrones — “Battle of the Bastards”
Written by David Benioff and D.B. Weiss
Directed by Miguel Sapochnik

Game of Thrones — “The Rains of Castamere”
Written by David Benioff and D.B. Weiss
Directed by David Nutter

Game of Thrones — “The Winds of Winter”
Written by David Benioff and D.B. Weiss
Directed by Miguel Sapochnik

The Leftovers — “The Book of Nora”
Written by Tom Spezialy, Tom Perrotta and Damon Lindelof
Directed by Mimi Leder

BEST TV MOVIE:
“All the Way”
“Behind the Candelabra”
“Brexit”
“Deadwood: The Movie”
“Game Change”
“The Normal Heart”
“The Tale”
“Temple Grandin”
“A Very Murray Christmas”
“The Wizard of Lies”

2 NOMINATIONS
“American Crime”
“Behind the Candelabra”
“Feud: Bette and Joan”
“Game Change”
“The Normal Heart”
“Temple Grandin”
“True Detective”
“When They See Us”

1 NOMINATION
“All the Way”
“Black Mirror”
“Brexit”
“Deadwood: The Movie”
“Fosse/Verdon”
“The Night Manager”
“The Night Of”
“Olive Kitteridge”
“The Tale”
“Twin Peaks”
“A Very English Scandal”
“A Very Murray Christmas”
“The Wizard of Lies”