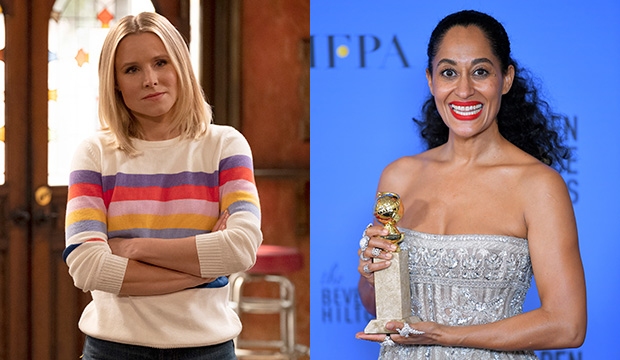 Rachel Brosnahan is the runaway favorite to win her second straight Best TV Comedy/Musical Actress Golden Globe for “The Marvelous Mrs. Maisel,” but don’t count out Kristen Bell (“The Good Place”), who could pull off a minor upset a la Tracee Ellis Ross (“Black-ish”) in 2017.

Like “Black-ish” back then, “The Good Place” had to wait until its current third season to score its first-ever Globe nominations, for Bell and for Best Comedy/Musical Series. “Black-ish” reaped three bids, for series, Ross and Anthony Anderson, two years ago.

Few saw a victory for Ross, who was in fourth place in our odds, with Issa Rae (“Insecure”) expected to continue the Hollywood Foreign Press Association’s trend of awarding newcomers from first-year shows. But Ross pulled it out, giving “Black-ish” its first major award of any kind.

Bell is in a similar boat as Ross was at the time, not only because both their shows broke through in their third seasons. Both are veteran TV stars who’ve been consistently working for almost two decades — Ross on “Girlfriends”; Bell on “Veronica Mars” and “House of Lies,” for which her co-star Don Cheadle won a Globe — so it could be a case of voters waiting for the “right time” to award someone with whom they’re familiar. The Globes also did this with Amy Poehler, who won while hosting on her third nomination in 2014 when “Parks and Recreation” also made the series lineup.

That series nomination is very telling. Both Ross and Bell are one of two people in their fields whose show is also up for series. Ross was up against Julia Louis-Dreyfus, but the Globes has never warmed to “Veep.” (In hindsight, the lack of a series nomination for “Insecure” should’ve set off alarms.) Bell, of course, is facing off against Brosnahan, whose series, “Maisel,” is gunning for its own repeat win. A series bid often gives individual nominees a leg up in their races since it’s a sign of extra support.

And both Ross and Bell hail from network series, which are losing ground to cable and streaming. The Globes often likes to cover as many networks as possible. Ross’ win “took care” of ABC and Bell’s would do the same for NBC, on which the Globes air.

If Bell does pull off the win, it won’t be as big of a shocker as Ross’ win was; Bell is in second place in our odds, followed by Candice Bergen (“Murphy Brown”), Alison Brie (“GLOW”) and Debra Messing (“Will & Grace”).

Be sure to make your Golden Globe predictions so that Hollywood insiders can see how their shows and performers are faring in our odds. You can keep changing your predictions until just before winners are announced on Jan. 6. Read more Gold Derby entertainment news.