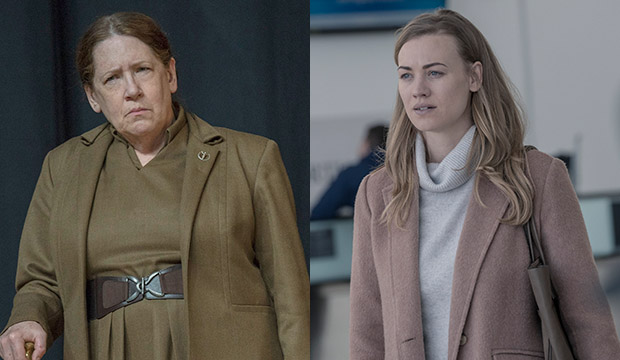 Ann Dowd and Yvonne Strahovski have had their blessed days at the Golden Globe Awards, receiving their inaugural bids for their performances on Hulu’s “The Handmaid’s Tale” the past two years. Dowd was nominated in 2018 for playing the spine-chilling Aunt Lydia and  Strahovski in 2019 for playing the ambiguous Serena Joy, both in the catch-all TV supporting actress category. They are now eligible for the show’s third season, but can one, or perhaps even both, of them return?

Let’s take a closer look at each.

– Ever since Dowd reaped dual Emmy nominations in 2017 for “Handmaid’s” in Best Drama Supporting Actress, which she won, and “The Leftovers” in Best Drama Guest Actress, she’s been riding high and capitalizing on all the goodwill that had been building up in the preceding years. The Hollywood Foreign Press Association is one of the few groups that has has not rewarded Dowd with hardware yet, which could at the very least propel voters to check her off for a nom this year.

– Despite being dropped from the drama series lineup last year, “Handmaid’s” still managed to snag acting bids for leading lady Elisabeth Moss in Best Drama Actress and Strahovski, which shows that there’s still support for the show’s actors from the HFPA.

– While Dowd has always had a less screen time than many of her fellow supporting players on “Handmaid’s” — and the third season was no exception — she thoroughly commands the screen with an unforgettable presence whenever she graces it. In the third season, she has two giant showcases with Episodes 4 (“God Bless the Child”) and 8 (“Unfit”), with the latter exploring Aunt Lydia’s long-awaited backstory.

– Despite receiving a second consecutive drama supporting actress Emmy nom for “Handmaid’s’” second season, Dowd was snubbed at the Globes last year and replaced by Strahovski in the category. The only recent performers to return to the Globes after being dropped were Matthew Rhys (Best Drama Actor) and Keri Russell (Best Drama Actress) for “The Americans,” who snagged bids for Seasons 4 (2017) and 6 (2019) but were both snubbed for the fifth installment.

– A shelf full of hardware usually bolsters your chances going forward, but not necessarily at the Globes. Since Dowd has already been nominated there, not to mention won at Critics’ Choice and the Emmys, HFPA voters might feel like she’s already been amply rewarded for this role.

– Strahovski is still riding the wave of support for her dynamite turn in the second season, which not only earned her a maiden noms at the Globes, Critics’ Choice Awards and Emmys. The HFPA could still be the first group to hand her a win for playing Serena Joy, which isn’t beyond the realm of possibility as it loves to get to someone before everyone else does.

– Although “Handmaid’s” was dropped from series last year, Strahovski was still able to sneak into the stacked catch-all TV supporting actress race last year, meaning that voters specifically singled her out. “Handmaid’s” most likely missing out on a drama series nomination once more this year might not necessarily derail her chances of sneaking in.

– Presumably one of the main reasons why Strahovski was able to make the cut last year despite the series being dropped was her hailed performance in the second season. And if that’s anything to go by, then you shouldn’t count her out this year as well. In the third season, Serena had viewers testing their patience once again, but to the benefit of Strahovski, who had all her dramatic chops on display channeling Serena’s ambiguity.

– If she wasn’t able to bag a win last year when she was hot off her Emmy nom, then it could be difficult for her to break into the lineup this year against an even more competitive field.

– While Strahovski could certainly cash in on being due for a win for this role, the HFPA typically prefers the new kids on the block. Like with Dowd, voters could just consider her one nomination her ultimate reward.