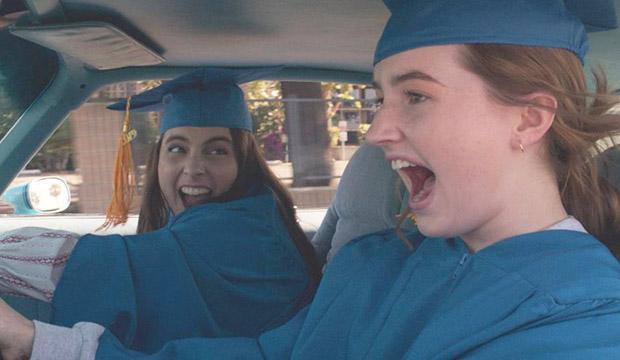 Looking to break through in the Best Comedy/Musical Actress category at the Golden Globe Awards are “Booksmart” stars Kaitlyn Dever and Beanie Feldstein. In our combined Golden Globes odds, Dever currently ranks in sixth place, while Feldstein ranks in second. But don’t be surprised to see both names pop up during Monday’s nominations.

The duo instantly lights up the screen as Amy (Dever) and Molly (Feldstein), two girls about to graduate from high school, who, after years of intense studying, decide to finally break the rules on their last day of classes. Not only do Dever and Feldstein have undeniable chemistry, but their comedic chops are on full display and they’re able to infuse their characters with warmth while remaining grounded in reality. Their fun, lighthearted performances are textbook examples of what the comedy/musical Globe acting categories were made for.

Both also have the added benefit of the Hollywood Foreign Press Association having shown an affinity for coming-of-age movies and its actors, especially in the comedy/musical categories; recent examples include Elsie Fisher (“Eighth Grade,” 2018), Saoirse Ronan (“Lady Bird,” 2017), who won, and Hailee Steinfeld (“The Edge of Seventeen,” 2016).

And even if they aren’t starring in coming-of-age movies, the HFPA has been much more welcoming to younger actors than other industry groups have. Timothée Chalamet (Best Supporting Actor for “Beautiful Boy,” 2018, and Best Drama Actor for “Call Me By Your Name,” 2017), Ansel Elgort (Best Comedy/Musical Actor for “Baby Driver,” 2017), Ronan (Best Drama Actress for “Brooklyn,” 2015), Quvenzhané Wallis (Best Comedy/Musical Actress for “Annie,” 2014) and Shailene Woodley (Best Supporting Actress for “The Descendants,” 2011) all landed nominations on the movie side this decade.

Dever had her big breakthrough in Destin Daniel Cretton’s “Short Term 12” (2013) and has since appeared in numerous movies, including “Beautiful Boy,” “The Front Runner” (2018) and “Detroit” (2017). On the TV side, voters may know her as Loretta McCready on “Justified” or Tim Allen’s onscreen daughter Eve Baxter on ABC’s/Fox’s “Last Man Standing” or just recently as Marie Adler on Netflix’s eight-part miniseries “Unbelievable.”

SEE Kaitlyn Dever on ‘Booksmart’: ‘It was so refreshing to read a story about female friendship that was so true’ [EXCLUSIVE VIDEO INTERVIEW]

She’s competing for the latter in Best Limited Series/TV Movie Actress alongside her co-star Merritt Wever. Given that her role as Marie, a sexual assault survivor, is diametrically opposed to Amy, it’s possible that the former enhances her prospects of getting nominated for the latter. And hey, if Amy Adams (“Sharp Objects” and “Vice”) and Regina King (“If Beale Street Could Talk” and “Seven Seconds”) were able to nab dual film and TV nods last year, then Dever might be able to do so this year.

Feldstein, on the other hand, has been on the rise since she appeared in Greta Gerwig’s “Lady Bird,” which won Best Comedy/Musical Film and Comedy/Musical Actress for Ronan. In August, FX announced that she’ll play Monica Lewinsky in the upcoming third installment of Ryan Murphy’s FX anthology series “American Crime Story,” titled “Impeachment,” which is set to air in September 2020.

Plus, Feldstein is starring in Richard Linklater’s screen adaptation of Stephen Sondheim’s musical “Merrily We Roll Along.” And while we won’t see the finish product until two decades from now, her casting put her in the headlines. Also bear in mind that she’s two-time Globe nominee Jonah Hill’s sister, which is worth noting since the HFPA loves to Hollywood families. Look no further than Golden Globe Ambassador(s) being scions of stars.

Currently rounding out the top 5 in our Globe odds are Awkwafina (“The Farewell”), Emma Thompson (“Late Night”), Constance Wu (“Hustlers”) and Ana de Armas (“Knives Out”).