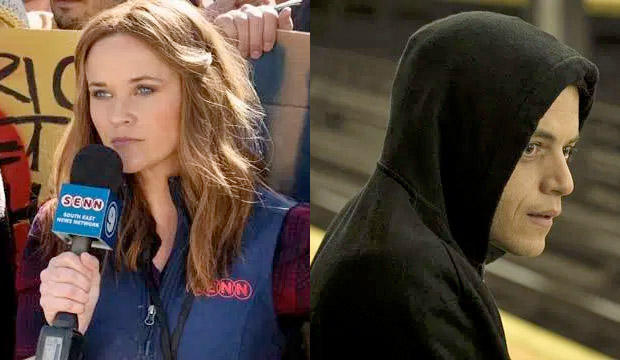 For months Gold Derby’s experts, editors and users have been making their TV predictions for the 2020 Golden Globes, and while collectively we got about 75% correct, that means we missed about 25%. Among the jaw-dropping nominations from the 11 television categories are two famous faces we should have seen coming: Reese Witherspoon (“The Morning Show”) and Rami Malek (“Mr. Robot”). Awards watchers had worried that Witherspoon would split her own vote with “Big Little Lies” (wrong!) and that Malek’s final season on “Mr. Robot” would be ignored by the Hollywood Foreign Press Association (nope!). Scroll down to see all 14 TV surprises in the Golden Globe nominations.

In terms of series nominations, our prognosticators correctly predicted 11 out of 15, only missing bids for HBO’s “Big Little Lies” in drama, Netflix’s “The Kominsky Method” in comedy and Showtime’s “The Loudest Voice” and Hulu’s “Catch-22” in limited. Collectively we also forecasted 30 of the overall 40 acting nominations in the lead and supporting races.

“Big Little Lies” is a former Golden Globe favorite that previously competed as a limited series, where it won a whopping four trophies. We thought “Game of Thrones” would snag its spot in drama instead, but clearly there was no love lost for the fantasy epic. This time around “BLL” is also up for lead actress (Nicole Kidman) and supporting actress (Meryl Streep). The other four nominees for Best Drama Series are “The Crown,” “Succession,” “The Morning Show” and “Killing Eve.”

“Kominsky” is the reigning winner for Best Comedy Series that is now hoping to become the first since “Glee” (2009-10) to repeat. When the show failed to do any serious business at the Emmy Awards, many pundits dropped it from their Golden Globe predictions, but it had the last laugh by earning three bids for series, Michael Douglas and Alan Arkin. The other four Best Comedy Series contenders are “Fleabag,” “The Marvelous Mrs. Maisel,” “Barry” and “The Politician.”

For Best TV Movie/Limited Series, Gold Derby erroneously thought “When They See Us” and “El Camino: A Breaking Bad Movie” would earn top bids instead of “The Loudest Voice,” which is new to the awards scene, and “Catch-22,” which bombed at the Emmys. Russell Crowe and Christopher Abbott also received acting bids for “The Loudest Voice” and “Catch-22,” respectively. The other three nominees are “Chernobyl,” “Fosse/Verdon” and “Unbelievable.”

Below, see all 14 television nominations that caught us off guard. Find out who wins the Golden Globe Awards in TV and film when the ceremony airs Sunday, January 5 on NBC.