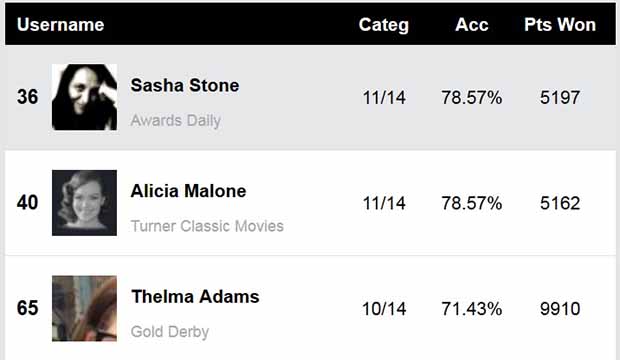 Congratulations to our Experts Alicia Malone (TCM) and Sasha Stone (Awards Daily) for an outstanding score of 78.57% when predicting the 2019 Golden Globe film winners on Sunday. They are best among 26 Experts, journalists who cover the entertainment industry throughout the year, and has a great point score total of 16,692 by using the 500 super bets wisely. See Experts’ scores.

Almost 4,000 people worldwide predicted these film winners for the 14 categories chosen by the Hollywood Foreign Press Association. The Golden Globes ceremony was live in Beverly Hills and was hosted by Andy Samberg and Sandra Oh on NBC.

SEEGolden Globes film winners 2019: ‘Green Book’ is the top film with 3 wins while ‘Bohemian Rhapsody’ shocks ‘A Star is Born’