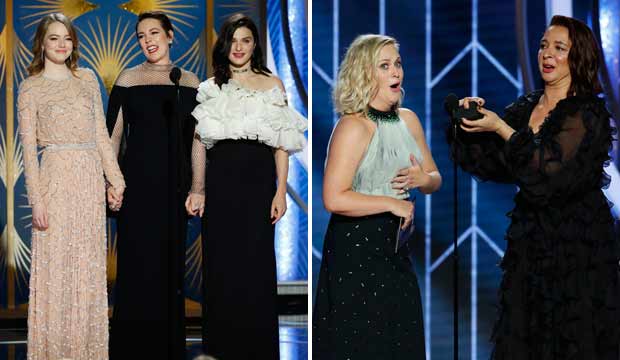 There were great moments during Sunday night’s 76th Annual Golden Globe Awards, including heartfelt acceptances from winners Regina King, Glenn Close, Rami Malek, Carol Burnett and Jeff Bridges. You can vote for your favorite speech of the night here, but what about the rest of the telecast? Scroll down to vote for your favorite moment from the show here.

I for one was partial to everything involving “The Favourite.” Olivia Colman was delightful when she accepted Best Film Comedy/Musical Actress and called her co-stars Emma Stone and Rachel Weisz “my bitches.” But before that the trio of actresses presented a clip from their film, and you know society has come a long way when a movie about a same-sex love triangle wins awards and the stars present it on national television with double entendres about lesbian sex. My fellow editor Susan Wloszczyna wasn’t a big fan of those jokes, but I thought they were in good fun.

Speaking of Emma Stone, Korean-Canadian actress and Globes co-host Sandra Oh took the opportunity to address the persistent problem of Hollywood whitewashing; in one of the funniest jokes of the telecast she claimed that Best Film Comedy/Musical nominee “Crazy Rich Asians” was the first studio movie with an Asian lead since “Ghost in the Shell” and “Aloha,” referencing the controversies of Scarlett Johansson (“Ghost”) and, yes, Emma Stone (“Aloha”) taking roles as Asian characters in recent years.

Oh also got serious when she explained why she took the gig as Globes emcee alongside Andy Samberg. She told the audience that she wanted to bear witness to a moment of increased representation for marginalized groups. That included nominations for projects centered around not just Asian characters, but also black characters (“Black Panther,” “BlacKkKlansman,” etc.), LGBT characters (“Pose,” “A Very English Scandal,” “Bohemian Rhapsody”), Latin American characters (“Roma”) and women (“Favourite,” “Killing Eve,” “Sharp Objects”).

On a lighter note, Maya Rudolph made a strong case for hosting next year’s Globes — and maybe every other award show between now and then — when she presented with Amy Poehler, herself a three-time Globes host. After joking about how unimportant supporting actors are they presented Best Film Supporting Actor, and following Mahershala Ali‘s acceptance speech for “Green Book” Rudolph proposed marriage to Poehler, a nod to the last Emmys where winning director Glenn Weiss got engaged to his girlfriend Jan Svendsen.

That’s just a few of the moments that stood out to me. How about you? Vote below, and discuss these moments and more in the comments.