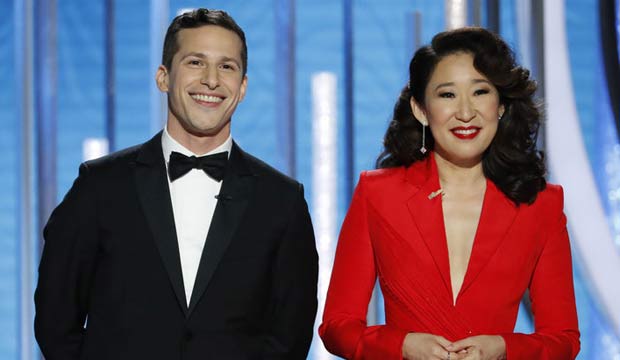 For we awards-obsessed writers and editors at Gold Derby, the Golden Globe Awards are the official launch of a winter full of trophies, and what better way to celebrate than to watch celebrities drink and mingle while fancy statues are handed out to the best in film and television by about 90 foreign journalists who make up the Hollywood Foreign Press Association?

But some moments are better than others. Below, read our collective thoughts on the highs, lows, and WTF moments of Sunday’s kudoscast for the Golden Globes 2019. And check out the complete list of winners here.

Carol Burnett getting teary-eyed over her inaugural honor. Plus, I never tire of seeing her sashaying down the stairs with that curtain rod. Also Rami Malek’s white bow tie. Freddie Mercury would approve. – Susan Wloszczyna

The drama surprises! The pure shock and joy of Glenn Close’s upset. If the Oscar race is Close vs. Olivia Colman I’m happy with whoever wins! Rami Malek’s amazing speech. And no one saw “Bohemian Rhapsody” winning! Wow what happens next? – Amanda Spears

Glenn Close’s glorious reaction to winning Best Film Drama Actress will surely be the meme of the night. She seemed stunned that she won, shared a tender moment with her rival Lady Gaga on her way to the stage, was already in tears by the time she reached the mic, and then delivered the best speech of the night. – Daniel Montgomery

Those upsets by “Green Book” came at just the right time as Oscar voting kicks off on Monday. This charmer could go all the way now. – Paul Sheehan

On the TV side, Richard Madden winning for his electrifying, intense and heartbreaking performance in “Bodyguard.” On the film side, I do not recall a better awards acceptance speech in quite some time than the masterclass Oscar audition that Glenn close gave us tonight. It is that kind of raw, unadulterated emotion that we live for at awards shows. Brava! – Rob Licuria

So, “Bohemian Rhapsody” was the best drama film (questionable, but OK), but it wasn’t nominated for anything else other than leading man Rami Malek? That is crazy. – Rob Licuria

Taunting Lady Gaga’s “100 people in a room” quote. At least she yelped her protest. – Susan Wloszczyna

Jeff Bridges, you knew you were going to win. It’s best to prepare a speech – Amanda Spears

Time management. You know it’s bad when they actually try to play off one of the Best Picture winners. I’m glad most of the victors had time to speak (including Peter Farrelly, who demanded that they not play him off when “Green Book” took top honors), but it was optimistic to think that a show with 25 categories and two lifetime achievement awards would run on time. Next year the show might have to forego hosts just to fit everything into a three-hour telecast. – Daniel Montgomery

Who do I have to talk to to get awards shows to stop assigning presenters categories in which their project is nominated? It’s lazy, dumb and awkward if their project doesn’t win, and shameless when it does. – Joyce Eng

The sloppy cuts coming in and out of commercial. This show is usually so sleek and smooth but appeared rudderless this year. – Paul Sheehan

DISCUSS the Golden Globes with Hollywood insiders in our notorious forums

Whoever laughed when Sandra Oh got serious-with-a-capital-S at the end of the monologue about representation. – Joyce Eng

Please. Stop. Presenting. Clips. Of. The. Best. Film. Nominees. The show went over by about 20 minutes, mostly because of this out-dated awards show trope that just slows down the pace and is really just an excuse to air abridged trailers that we have all seen on YouTube. Thank you, next. – Rob Licuria

Sending TV stars to Siberia in that big ballroom meant awkward dashes to the stage for the likes of Michael Douglas. – Paul Sheehan

Bringing out the lovely ladies of “The Favourite” and forcing them to demean themselves with lame sexual innuendo jokes. – Susan Wloszczyna

Oh Gaga, when your fellow songwriters have paid tribute to you it’s best not to say anything. – Amanda Spears