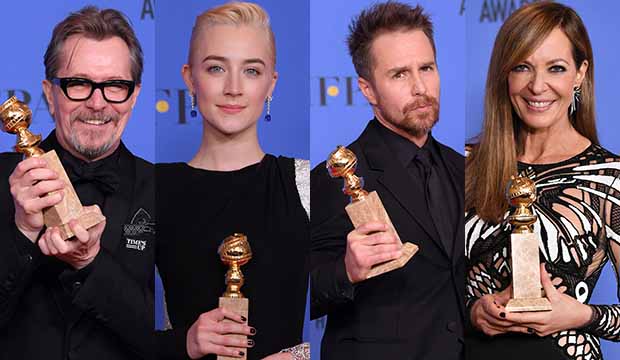 The 76th annual ceremony will be live this Sunday, January 6, on NBC at 8 p.m. ET (5 p.m. PT) and is hosted by Sandra Oh and Andy Samberg. There will be two special presentations during the ceremony. Jeff Bridges is receiving the Cecil B. DeMille Award for life achievement in film. Carol Burnett is receiving a life achievement award for television, which will be named after her for all future recipients.

More presenters will be added over the next few days. No word yet on the other film acting winners from last year’s ceremony — Frances McDormand and James Franco — and whether they will be returning as presenters.

Our Gold Derby odds are predicting tight races in the film acting races of Glenn Close (“The Wife”) vs. Lady Gaga (“A Star Is Born”), Bradley Cooper (“A Star Is Born”) vs. Rami Malek (“Bohemian Rhapsody”), Emily Blunt (“Mary Poppins Returns”) vs. Olivia Colman (“The Favourite”) and Christian Bale (“Vice”) vs. Viggo Mortensen (“Green Book”). On the TV side, look out for such shows as “Homecoming,” “Killing Eve,” “Pose,” “Barry,” “The Good Place” and “The Marvelous Mrs. Maisel.”