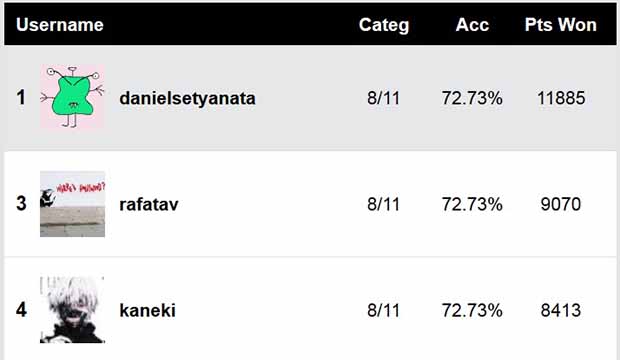 Congratulations to our User danielsetyanata for a terrific score of 72.73% when predicting the 2019 Golden Globe television winners on Sunday. He is actually tied with 27 other people but has the better point score total of 11,885 by using the 500 super bets wisely.

Over 2,600x people worldwide predicted these TV winners for the 11 categories chosen by the Hollywood Foreign Press Association. The Golden Globes ceremony was live in Beverly Hills and was hosted by Andy Samberg and Sandra Oh on NBC.

Our top scorer got eight of the 11 categories correct. His only three misses were for “The Kominsky Method” for Best Comedy Series (choosing “The Marvelous Mrs. Maisel”), “The Americans” for Best Drama Series (choosing “Killing Eve”) and Patricia Clarkson (“Escape at Dannamora”) for Best Movie/Limited Series Actress (choosing Amy Adams from “Sharp Objects.”

You can see how your score compares to all others in our leaderboard rankings of all contestants, which also includes links to see each participant’s predictions. To see your own scores, go to the User menu in the top right corner of every page of Gold Derby when you’re signed in to the site. Use the drop down menu to go to “View Profile,” then look for the links to your “Award Show Scores.” Gold Derby must evaluate each potential winner’s eligibility as per our contest rules. If eligible, the first-place finisher receives a $100 Amazon gift card.

For the nine Editors predicting, we have a five-way time for first place at 63.64% between Marcus Dixon, Joyce Eng, Rob Licuria, Daniel Montgomery and Matt Noble. Susan Wloszczyna is tied with Paul Sheehan in the next spot with 54.55%. Tom O’Neil follows with 45.45% and then myself with 36.36%. See Editors’ scores.