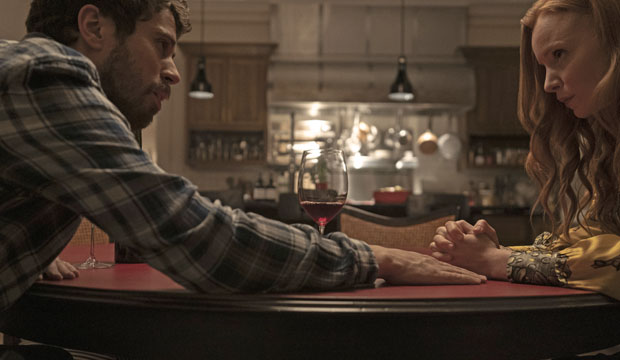 “The Haunting of Hill House” meets “Homecoming” — that could be Apple’s pitch to awards voters for “Servant,” its new half-hour drama premiering November 28. With the narrative transpiring entirely inside (and occasionally on the block just outside) a Philadelphia townhouse, “Servant” compensates for set pieces with atmospheric directing led by M. Night Shyamalan, complete with the long takes that were critically acclaimed hallmarks of the other aforementioned streaming series. Although there are flourishes of horror, like in the title sequence reminiscent of “The Haunting of Hill House,” this is a psychological thriller that builds tension with incomplete memories and unconventional framing in the vein of “Homecoming.”

Still on hiatus, fellow half-hour “Homecoming” leaves nomination slots open at the Golden Globe Awards this year for Best Drama Series, Actress and Actor that could be filled by “Servant.” The “Homecoming” nomination recognized past favorite Sam Esmail, who had won the same prize for creating “Mr. Robot.” A Best Series nomination for “Servant” would honor executive producer Shyamalan, a past nominee on the film side for “The Sixth Sense.” Both “Homecoming” and “Servant” pair a more-celebrated lead actress with a rising-star lead actor (Julia Roberts and Stephan James in the case of “Homecoming”). A two-time Emmy nominee for “Six Feet Under,” Lauren Ambrose has top billing in “Servant,” but her co-star Toby Kebbell might stand an even better chance at a nomination.

Kebbell has the benefit of lighter competition, as his category has only one incumbent nominee in contention: Billy Porter (“Pose”). Kebbell also has the more sympathetic role opposite Ambrose, whose character is occasionally prone to theatrics, so the narrative favors his character’s perspective, especially in the 2019 episodes that are technically eligible for consideration. A past BAFTA nominee for the Rising Star Award, Kebbell has been widely seen on television in the “Black Mirror” first season finale and in film through his motion-capture performances in the “Fantastic Four,” “Kong” and “Planet of the Apes” franchises. A Best Drama Actor nomination for him would be a logical follow-up to the recent nominations in the same category for Stephan James (“Homecoming”), Freddie Highmore (“The Good Doctor”) and Rami Malek (“Mr. Robot”), recognizing breakthrough performances by actors with years of respectable credits.

Between its confined setting and small main cast rounded out only by Nell Tiger Free (Myrcella Baratheon in “Game of Thrones”) “and” Rupert Grint (Ron Weasley in “Harry Potter”), this is a show that focuses squarely on its performances, often in close-up. The Globes have taken to the acting especially in half-hour dramas over the years. Lead actress Riley Keough received the lone nomination for “The Girlfriend Experience;” the last Best Drama Series nominee to receive four acting nominations for a single season was half-hour “In Treatment,” including a win for lead actor Gabriel Byrne.

The Globes reflect the international sensibilities of Hollywood Foreign Press Association’s voting membership. An “In Treatment” producer even remarked back then, “The show has a lot of international appeal and a very international cast, so I think that’s why the Golden Globes took more notice than the Emmys.” This bodes surprisingly well for “Servant” because despite its American characters and setting, three quarters of its series regulars, as well as its writer Tony Basgallop (“24,” BAFTA-nominated for “To the Ends of the Earth”), are English, with Shyalaman being Indian-born.

Buzz for “Servant” has been quiet and the show will not even premiere until after voting for nominations closes, but the Globes love to discover shows and Apple has provided all 10 episodes from the first season to the press. Best Movie/Limited Series nominee “Escape at Dannemora” aired November 18 to December 30 last year; Patricia Arquette won Best Movie/Limited Actress on January 6 for it over Connie Britton, whose “Dirty John” aired November 25 to January 13. Two years ago, the first season of “The Marvelous Mrs. Maisel” was released on November 29, announced as a nominee on December 11 for Best Comedy Series and Best Comedy Actress for Rachel Brosnahan, then won those awards on January 7.

This will likely be the most critically acclaimed show to debut on Apple TV+ in 2019, so buzz should build considerably when the review embargo lifts on November 20, giving voters time to sample it before ballotting closes on November 25. Calling it Apple’s best show, NPR‘s David Bianculli explains, ” ‘Servant’ is so good, so unpredictable and so unsettling, it’s worth waiting for.”

Make your Golden Globe nominee predictions today so that Hollywood insiders can see how their TV shows and performers are faring in our odds. You can keep changing your predictions as often as you like until just before nominees are announced on December 9. And join in the fun debate over the 2020 Globes taking place right now with Hollywood insiders in our television forums. Read more Gold Derby entertainment news.