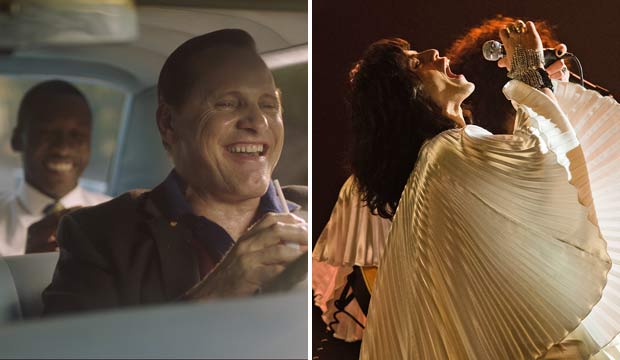 The 76th Annual Golden Globe Awards were held on Sunday night, January 6. Handed out by the international journalists who make up the Hollywood Foreign Press Association, these kudos honor the best in both film and TV, but while the TV prizes don’t usually influence the Emmys, the film awards are ideally timed to impact the Oscars, for which voting starts on January 7. So who won, who lost, and what does it mean for the rest of the awards season? Scroll down for our live blog with minute-by-minute analysis of the results, and check out the full list of winners right here as they’re updated.

But the Globes didn’t have as much influence over the Best Picture race. The HFPA picked “Lady Bird” (comedy/musical) and “Three Billboards” (drama), while the Oscars eventually went with “The Shape of Water.” How much influence will these awards have this year?

Voters spread the wealth in the nominations with “Vice” receiving six bids followed by “A Star is Born,” “The Favourite” and “Green Book” with five apiece and “Mary Poppins Returns” with four. Going into this event “Star is Born” was our odds-on favorite to win Best Picture both here and at the Oscars next month. Is it still the front-runner coming out of these awards? Find out below starting at 8:00pm (all times listed are Eastern).

8:17pm — BEST ANIMATED FEATURE goes to “Spider-Man: Into the Spider-Verse.” The award was quite appropriately presented by the stars of “Black Panther,” that other little movie based on Marvel Comics that is among the most acclaimed of the year. “We’re in an alternate universe,” said a surprised producer Phil Lord upon accepting the prize. This is only the third non-Disney/Pixar film to win this award from the Globes. It was up against “Incredibles 2” along with “Isle of Dogs,” “Mirai” and “Ralph Breaks the Internet.” Five of the last six Golden Globe winners in this category went on to win the Oscar. Watch our interview with the directors of “Spider-Man” here.

9:03pm — BEST ORIGINAL SCORE goes to Justin Hurwitz for “First Man,” a bit of surprise since “First Man” underperformed overall in the nominations, receiving only one other bid for supporting actress Claire Foy. He beat the scores from Best Picture nominees “Black Panther” and “Mary Poppins Returns,” plus “Isle of Dogs” and “A Quiet Place.” He thanks the sound mixers who made his risky theremin music sound good, and the “brilliant and loyal” director Damien Chazelle. Hurwitz previously won two awards for Chazelle’s “La La Land”: Best Score and Best Song (“City of Stars”). Watch our interview with Justin Hurwitz here.

9:06pm — BEST ORIGINAL SONG goes to “Shallow” from “A Star is Born” — no surprise there. “You gave it emotional resonance,” says songwriter Mark Ronson to Bradley Cooper about his use of the song in the film. And to Lady Gaga he says, “Thank you to the captain of the SS Shallow,” who elevated the film “with your devastatingly beautiful performance.” Adds Lady Gaga, “As a woman in music, it is really hard to be taken seriously,” so she thanks her co-writers for their support. Watch our interview with Mark Ronson here.

9:16pm — BEST FILM SUPPORTING ACTRESS goes to Regina King for “If Beale Street Could Talk”! “Amy, thank you for the prayers, sweetheart,” she says to her rival in this category — poor Amy Adams leaves these Globes empty-handed, but Adams already has a couple of Globes on her mantel. And she also thanks Barry Jenkins for giving her son (who is her Globes date) a film where he sees himself for the first time. She also uses her platform to vow to hire 50% women on all projects she produces from now on. This race was a nail-biter following King’s snub at the SAG Awards; until then King had been romping through the awards season, collecting prize after prize. Is she back on track for Oscars? Watch our interview with Regina King here.

9:28pm — BEST FILM SUPPORTING ACTOR goes to Mahershala Ali for “Green Book.” He was previously nominated for “Moonlight” two years ago, but that was the year when Aaron Taylor-Johnson pulled off a huge upset in this category by winning for “Nocturnal Animals.” “Doctor Shirley was a brilliant man,” says Ali, who was inspired by the real-life musician’s dignity and passion. He also thanks his “extraordinary scene partner” Viggo Mortensen.

9:33pm — BEST FILM SCREENPLAY goes to “Green Book,” written by Nick Vallelonga, Brian Hayes Currie and Peter Farrelly. Vallelonga apologizes for taking so long to get to the podium. “We’re the writers. We were seated in the kitchen,” he says. Vallelonga’s father is the character played by Mortensen in the film, so he thanks both of his parents and Linda Cardellini, who plays his mother and “makes me cry every time.” This award was a bit of an upset; our odds favored “The Favourite.” So it looks like “Green Book” might be on its way to a happy ending.

9:42pm — BEST FILM COMEDY/MUSICAL ACTOR goes to Christian Bale for “Vice.” “What a bunch of lucky buggers we are,” says Bale about a career in show business upon winning the second prize of his career. He previously won a Globe for his supporting role in “The Fighter” (2010). He also thanks his wife for teaching him when to shut up during an awards show speech. But he adds after that, “Thank you, Satan, for giving me inspiration on how to play this role,” and suggests that maybe he should play another charisma-free politician next time, like Mitch McConnell. By winning this prize, Christian Bale held off “Green Book” star Viggo Mortensen after the film won its previous two categories.

9:50pm — BEST FOREIGN LANGUAGE FILM goes to “Roma,” which was close to a lock tonight since “Roma” is an Oscar contender for Best Picture and Alfonso Cuaron is also nominated tonight for writing and directing it. Cuaron thanks the stars of the film: “I am in awe of what they did.” He adds, “This film would not have been possible without the specific colors that made me who I am. Gracias familia, gracias Mexico!”

10:14pm — BEST FILM DIRECTOR goes to Alfonso Cuaron for “Roma.” He laments having to follow Jeff Bridges‘s Cecil B. DeMille Awards speech and Harrison Ford presenting his category. “I feel a little bit like cheating,” says Cuaron because he thinks his job on the film was just watch his actors “exist” on the screen. And it was really directed by his mother and family. This is Cuaron’s third Globe and his second for Best Director; he previously won this category just five years ago for “Gravity” (2013).

10:44pm — BEST FILM COMEDY/MUSICAL ACTRESS goes to Olivia Colman for “The Favourite.” It’s her second nomination and second win. She was previously a surprise winner for her supporting role in the TV miniseries “The Night Manager,” but she wasn’t present to accept that award, so this is her first time on the Golden Globes stage as a winner. “I’m not going to cry because my entire table will point and laugh at me … Thank you for the sandwiches,” she says upon her victory. She also thanks “my bitches” Emma Stone and Rachel Weisz.

10:54pm — BEST FILM COMEDY/MUSICAL goes to “Green Book.” That’s three wins out of five nominations for the film about a road trip through the Jim Crow-era South. Peter Farrelly thanks executive producer Octavia Spencer, “the best thing to happen” to the movie. He adds, “This story gave me hope, and I wanted to share that hope with you.” That’s a wrap for the comedy/musical contenders with three dramatic prizes to go. “The Favourite” and “Vice” won one award each, while “Mary Poppins Returns” and “Crazy Rich Asians” were shut out.

11:03pm — BEST FILM DRAMA ACTRESS goes to Glenn Close for “The Wife” in a big upset over Lady Gaga, who was considered the overwhelming front-runner for “A Star is Born.” Even Close looked stunned, and she shared a warm moment with Lady Gaga on her way up to the podium. “It was called ‘The Wife,’ I think that’s why it took 14 years to get made,” she remarks about movies about women. She also thanks her mother, who “sublimated herself to my father” during her life, much like Close’s character does in the film. And to women like her mother she says, “We have to find personal fulfillment. We have to follow our dreams.”

11:13pm — BEST FILM DRAMA ACTOR goes to Rami Malek for “Bohemian Rhapsody.” This is actually his first Globe; he earned two previous nominations for TV’s “Mr. Robot” but lost both times even though the show won Best Drama Series in its first year.  “Thank you to Freddie Mercury for giving me the joy of a lifetime,” he says. “This is for you, gorgeous!” The good news for Malek, though, is bad news for “A Star is Born,” which has only won Best Original Song with one category to go.

11:18pm — Whoa! BEST FILM DRAMA goes to “Bohemian Rhapsody” in a huge upset over “A Star is Born.” The only victory for “A Star is Born” tonight was Best Song for “Shallow.” “Bohemian” is the first winner of Best Film Drama without a Best Director nomination since “Scent of a Woman” 26 years ago. But it also means that no drama picture was able to overtake “Green Book” with its three total wins, making it the top winner of the night. “Bohemian” and “Roma” are next up with two apiece. “The Wife,” “The Favourite,” “Vice,” “First Man” and “A Star is Born” claimed one prize each.