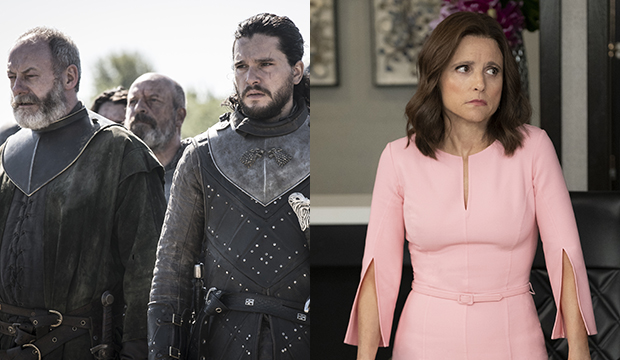 “Game of Thrones” and “Veep’s” Julia Louis-Dreyfus have a lot of things in common. Both shows aired on HBO and ended this year. They’ve both won a boatload of record-setting Emmys. And neither has won their respective top Golden Globe, Best Drama Series and Best TV Comedy/Musical Actress. Will either grab that elusive Globe on their final shot?

While Emmy voters have tripped over themselves handing statuettes to “Thrones,” including a record-tying fourth Best Drama Series win last month, and six straight Best Comedy Actress wins to JLD for “Veep,” the Hollywood Foreign Press Association has been far more cool — you can even say ice cold — to them. “Thrones” does have one Globe win under its belt — Best TV Supporting Actor for Peter Dinklage for the first season — but it hasn’t even been nominated for drama series every season, amassing just five bids after snubs for its second and third installments.

Louis-Dreyfus has a Golden Globe for “Seinfeld,” but she’s come up short for “Veep” despite becoming the most awarded performer for a single role at the Emmys. Like “Thrones,” she too hasn’t been nominated by the HFPA every season, missing out for “Veep’s” penultimate sixth season two years ago. The Globe is the only major award missing from Louis-Dreyfus’ trophy case for “Veep.” As for the series itself, “Veep” only has two Globe bids for Best Comedy/Musical Series. Compare that to its three consecutive series wins at the Emmys.

SEE No ‘Veep’ sweep: Julia Louis-Dreyfus suffers her first Emmy loss for the show at the hands of Phoebe Waller-Bridge

Since the Globes likes to move on to new things pretty quickly, you can argue that “Thrones” and Louis-Dreyfus have missed the boat and will go Globe-less, which is honestly the most likely scenario. But every now and then, the HFPA does play catch-up; it gave “Breaking Bad” its first two Globes ever for its final season — drama series and actor for Bryan Cranston — after the show became the biggest thing in the world. “The Americans” snagged its first and only Globe, for Best Drama Series to boot, earlier this year following two big Emmy wins in writing and for Matthew Rhys a few months prior for its great final season. The Globes also awarded “Modern Family” Best Comedy/Musical Series during its third season after the sitcom had already won two series Emmys, but the Globes had bypassed it the first two times for “Glee.”

“Thrones” and Louis-Dreyfus certainly have the clout to pull off belated wins, but the question is, does the HFPA care? Sure, “Thrones” is a global juggernaut, but the final season getting panned by critics and fans alike gives the Globes an out to once again not vote for it. And Louis-Dreyfus failed to go 7 for 7 for “Veep” at the Emmys, getting dethroned by “Fleabag” mastermind Phoebe Waller-Bridge, so there’s less incentive to make sure she gets anointed as well. And while we’re talking about playing catch-up, the Globes has to do the same with “Fleabag” since it didn’t nominate the series at all for its first season (just like the Emmys). The HFPA would definitely be more inclined to vote for the hottest show at the moment that’s a British production and was created by a Brit.

In our early odds, “Thrones” is expected to get a nomination, albeit in the precarious fifth slot behind “The Crown,” “Succession,” “The Morning Show” and “Killing Eve.” Louis-Dreyfus, however, is not expected to make the actress cut, sitting in seventh place behind Waller-Bridge, Kirsten Dunst (“On Becoming a God in Central Florida”), Rachel Brosnahan (“The Marvelous Mrs. Maisel”), Natasha Lyonne (“Russian Doll”), Hailee Steinfeld (“Dickinson”) and Gwyneth Paltrow (“The Politician”).