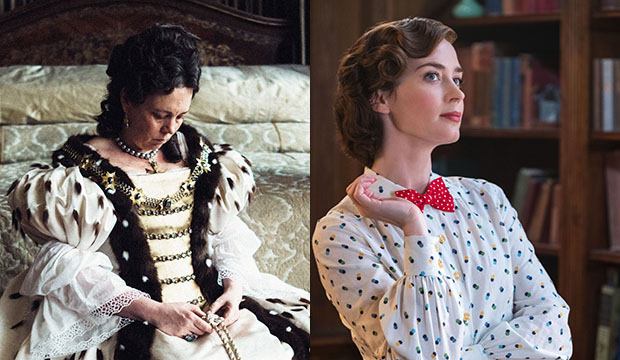 I started predicting Oscar winners as a film critic in 1979 and the one rule I have told others to follow when making their own predictions is “Put your personal preferences aside.” Once the nominations are announced, and you do a little gig for the ones you thought were deserving, cast your joy aside.

It’s all subjective, folks, and your opinion is literally worthless. That is, it is worth less than the opinion of a single member of the academy who actually has a vote.

Having said that, I plead guilty to breaking the rule every damn year. That’s why I, like so many other analysts, do their year-end thumbsucking with “Should win” (our favorite) and  “Will win” (our best guess of the membership’s favorite).

It goes the other way, too. We secretly root against nominees we don’t think are deserving, and that brings me to Emily Blunt, a SAG and Golden Globe nominee for portraying our favorite flying nanny in “Mary Poppins Returns.”

I think Blunt is a terrific actress and that she deserved her SAG nomination for. . .”A Quiet Place.” The double-nominee is on the lead ballot for “Poppins” and on the supporting ballot for the silent but deadly horror film directed by her co-star John Krasinski.

So, here’s the rule violation: I hate “Mary Poppins Returns” and don’t think it deserves anything beyond one for its score and maybe one for a song from it, though I can’t remember a single one. Does anyone believe a song from the new movie will have the enduring lovability of a half-dozen songs from the ‘64 classic?

Disney followed the guidelines of “Sequel Making 101” in readying this groaning rehash. I would be happy to credit Blunt for creativity in finding a different way to portray the magical nanny if I could stand the character she created.  On the contrary, I find her Mary to be kind of a spiritless bore.

Elsewhere, the movie is a series of sketches and characters transposed over the originals.

Lin-Manuel Miranda’s lamplighter in for Dick Van Dyke’s chimney sweep with a song number to underscore his sweetness, is on the Globe lead musical actor ballot. Who doesn’t like Miranda? But his not-bad-for-a-Puerto-Rican cockney accent sounded like an anchor being dragged along the cobblestone.

Think of any musical piece from the original film and you’ll find an unworthy successor in the new one. And the plot and cast of characters are second generation copies. Once again, Mary Poppins descends beneath her umbrella to the earthly Banks family, 20 years on with the kids grown up and facing foreclosure on their home from the evil landlord Fidelity Fiduciary Bank.

And so on it goes, copy after copy, until she flies away from another happy ending.

That’s how I feel about the movie, and because of that, I can’t support Blunt for merely being different in a bum knockoff. The movie has received mixed to positive reviews while Blunt’s reviews have been widely admiring, and she has a reasonable chance of winning a Globe for it Sunday night.

That would be a travesty given the competition from “The Favourite’s” Olivia Colman.

My colleagues on the Gold Derby experts panel are split 14-9 in predicting Colman to win. She is either first or second on every ballot. However, if our picks for Oscar nominations are any indicator, she is on the bubble. She’s on 14  of 30 ballots and on 11 of those, she is in the fifth spot. No one has her winning.

Would a Globe win, coupled with her SAG nomination, better her odds? Oh, yeah. But which of the five most likely Oscar nominees — Lady Gaga (“A Star is Born”), Olivia Colman, Glenn Close (“The Wife”), Melissa McCarthy (“Will You Ever Forgive Me?”), Yalitza Aparicio (“Roma”) — would she replace?

As for the Globes: